According to Reverb, a 23 year-old concert attendee identified as Alex McCormick has been charged with three counts of third degree assault after jumping off a venue balcony and landing on fellow fans at a recent Bring Me The Horizon show. The incident took place on February 13th at the Ogden Theater in Denver, CO. BMTH is currently on tour with Of Mice & Men. After approaching the balcony, McCormick, allegedly jumped on several concertgoers, resulting in head and neck trauma to two victims in addition to minor injuries to a third. McCormick then fled the scene but was arrested shortly thereafter, according to Lynn Kimbrough, communications director with the Denver District Attorney. McCormick was charged on February 18th and is due back in court on February 24th. 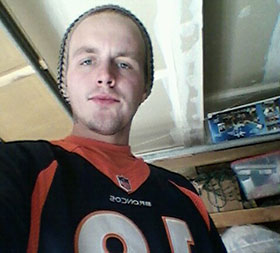 UPDATE 2/22/2014: It turns out that Alex McCormick (photo at right) isn't even really a fan of Bring Me The Horizon, but rather show opener Letlive. According to McCormick, "I love [Letlive]. Definitely one of my favorite bands. They NEVER disappoint." On the day of the show, McCormick still didn't have tickets and was begging for some assistance online via acquaintances. He eventually did get into the event, but ultimately spent a week in jail after the balcony jumping incident. Suprisingly, he doesn't regret any of it. Yesterday, he said that you shouldn't go to a hardcore show if you don't want to "get wild." Here's a quote from McCormick:
"Not that being in jail is cool or anything but it's definitely hilarious, to me, to see how people twist things. It's a hardcore/punk culture atmosphere. If you didn't come to the show to get wild and have a good time then why would you even show up? Stay home, nigga. People are moshing; punching each other in the face, kicking each other. People crowd surfing on people i.e. Far more wreckless behavior than my incident; 'I jump. You catch me'. Lol, can't believe I spent a week in jail for this bogusness considering the 'victims' were released from the hospital with no injuries according to a DT. Pff wha ever dude. I gotta mic handed to me and got to help close out a set to one of my favorite bands (letlive). I got to jump off a 20ft balcony and be caught by numerous, eager, fellow funtime havers. I don't regret it. I'll remember that day for as long as I live. Welcome to genuine hardcore and punk culture, Colorado! #508"