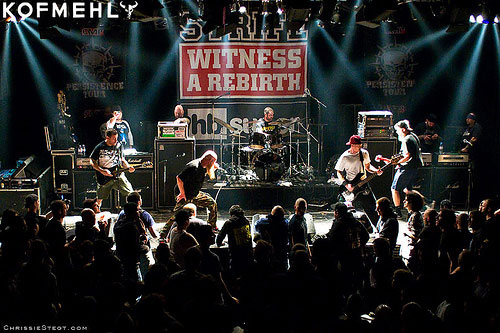 Swiss media outleft Solothurner Zeitung reports that a 28 year-old man died two days after landing awkwardly while stage diving during a Suicidal Tendencies show in Zurich a week ago. The incident took place during a stop of the 2014 Persistence Tour, featuring Suicidal Tendencies, Terror, Evergreen Terrace, and Strife, among others. Here is a roughly translated account from the newspaper's report:
"Unfortunately, the concert-goer was not properly caught after jumping from the stage and fell to the ground. A security guard immediately responded and immediately helped the man. Initially, the incident didn't look serious. After falling, the man left the concert floor, washed his hands, and then immediately began to head home. According to Pipo Kofmehl, Head of the Cultural Kofmehl, 'Our team decided, however, that he should immediately be taken to a hospital.' Unspecified complications subsquently occurred, including a possible seizure."
The man ultimately passed away two days later (on Friday, January 24th). Editor: Just this once, can we please not turn the comment section into a Scott Vogel comedy show?