Now that we've been dubbed Lambesisgoat by some of our comrades, we figured we'd better maintain our admittedly over-the-top coverage of Tim Lambesis and his legal woes. As I Lay Dying vocalist Tim Lambesis will turn 33 on Thursday, November 21st. Of course we can't imagine that he will be doing much celebrating. For starters, it seems unlikely that Tim Lambesis will escape prison time for (allegedly) attempting to hire a hitman to kill his estranged wife, Meggan. But that is certainly not the only issue Lambesis will have to deal with in the coming months - his aforementioned wife will likely provide Lambesis little mercy when it comes to their divorce case and the civil suit she filed in August. Lambgoat has done quite a bit of research regarding Meggan and her court filings, and here is what we've found: 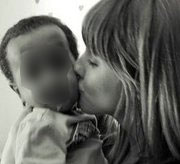 When she asked a judge for a protection order, Meggan Lambesis (at left) stated that "we fear for all our lives" and requested protection for two Boston terrier dogs, as well as herself and three children. Meggan, 32, subsequently obtained a "stay away" order protecting herself and two daughters, age 11 and 9, and a son, 5. All three children were adopted from Ethiopia. Meggan filed for dissolution of marriage in September 2012, one month after the two were separated (the couple was married in June 2004). She claims that the month before, Tim had sent her an email informing her that he no longer loved her and didn't want to be with her anymore. He was away on tour at the time. Meggan stated in court papers that after their separation, "He continued to enjoy a comfortable lifestyle and bought a new residence in his parents' name before he was arrested in May 2013 for allegedly hiring a hitman to have me killed." At the time of Tim Lambesis' arrest, he was living with girlfriend, Amanda. Those two, in addition to a roommate, were living Carlsbad. Meggan lived in a neighboring community, along the San Diego County coastline, in Encinitas. As of August 2013, Tim is listed in court paperwork as residing in Del Mar. 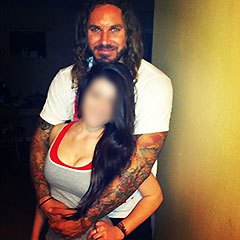 Tim Lambesis with girlfriend
One of Meggan's divorce attorneys asked for release of funds from a court-controlled account. That request was for $52,500 in "fees" and $40,000 in "costs." Meggan's divorce team is listed as four attorneys, a paralegal, a secretary, and a "clerical person;" the combined hourly rate for these seven persons comes to $1,740 per hour. Meanwhile, Tim Lambesis' divorce attorney listed his fee as $525 per hour. Tim stated that he has paid his own attorney $35,000 as of July 2013. After that date, a judge released $20,000 more to each attorney for both sides out of a trust account. In her most recent filings, dated August 7, 2013, Meggan estimated that Tim's income was $14,088 per month; she came to that figure from information she had for the time period November 2012 through February 2013. Tim filed a declaration of income and expense as part of the divorce proceedings. In that paperwork, Tim stated that his parents live with him. In his list of expenses, Tim claimed $2,000 per month for a "psychiatrist." In court papers, Tim stated that he has been unemployed since May 10, 2013; he last filed taxes for year 2010. Tim reported: "All tours were cancelled and the record label does not want to release any albums; the band still has an outstanding debt that will need to be repaid from any future income. The band was advanced 200k two years ago for a contract. That contract ended 6 mos ago and paying back $150k." The next hearing to renew the restraining order against Tim is set for Jan 15, 2014 in San Diego's North County Superior Courthouse. On the same day, in the same courthouse, the criminal case will be heard before another judge in another courtroom. The next date for the Lambesis' divorce proceedings is set for April 16, 2014 in San Diego's Downtown Courthouse.

On August 2, 2013, Meggan Lambesis filed a civil suit, seeking significant monetary damages from her not-yet-ex-husband. This suit was filed nearly one year after she filed for divorce, in the same courthouse where her husband is facing his much-discussed criminal case. Meggan claims "personal injury" and "assault, domestic violence" and "intentional infliction of emotional distress;" these injuries from when her husband allegedly hired a hitman. "The solicitation of another individual to commit murder upon a spouse is abuse….The actions of the Defendant …constitute an actionable assault….Timothy Lambesis' actions were intentional, reckless and outrageous….the actions of Defendant are not tolerated in a civilized society…" are some statements found in the latest action. In this case, Meggan Lambesis is asking $1 million for emotional distress and $25,000 in medical expenses to date, in addition to $75,000 for future medical expenses and $1 million in punitive damages. The suit also seeks attorneys' fees. The next court date for the civil matter is set for April 2014, in San Diego's North County Superior Courthouse.