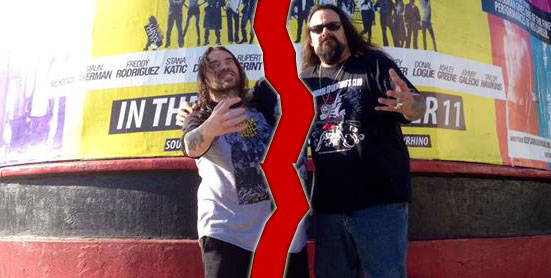 In a Facebook post that has since been removed, Broken Hope guitarist Jeremy Wagner explained that the band has been booted from the remainder of their tour with Deicide. In particular, Wagner had some harsh words for Deicide frontman, Glen Benton. Here you go:
"El Paso... first a maniac wielding a box-cutter cuts 3 fans at our concert—one ear-to-ear (thankfully all the victims are going to recover), then we learned that Glen Benton is kicking us off the 'No Salvation Tour'. It was a helluva night. Since we started this tour, we've had to endure Glen Benton's constant bitching and ultimatums. He was always trying to snip our balls and demanded that we couldn't use our fog machines and on some nights, we couldn't use our backdrops or other production elements because he had issues with all of it. With respect to the headliner, we abided. Moreover, in efforts of friendship, good tour vibes, and because we're simply cool fucking guys, we let Glen Benton and his band use OUR BACKLINE because they didn't want to bring all their gear on tour! "Specifically, we let the headliner use our cabinets and Glen Benton used our entire bass rig—head and cabinet—since his own bass head failed him early on. While we were generous with our backline, not once did Benton thank us, offer us a dime, or even lift a finger to help move anything—and he fucked up our bass head numerous times with his resetting the EQ, etc., despite us politely asking him NOT to mess with the bass tone we dialed in. Gee, with all the money and free gear Benton brags about to us daily, you'd think he'd do something about getting his own rig. "Things got ugly in El Paso when, after we learned Benton had lost our bass rig cables and once again fucked with our bass head, so, we put our foot down and told him he couldn't use the head anymore. Note: we still allowed Benton to use our cabinets for their show. "That said, Benton threw an EPIC hissy-fit and immediately kicked us off the tour! He booted Broken Hope from the tour simply because we refused to let him use our bass head! What bullshit. Now, even though that lame reason is what Benton used to get rid of us, I believe there's more to the story here. During this entire tour Benton has given BH and our crew nothing but a shitty attitude and has tried to sabotage our production every day for no good reason. Though Benton blocked us from using our fog machines, he couldn't stop us from using our professional soundman, nor stop us from giving concertgoers an amazing and high-powered show. The fact remains—as all our show attendees have seen—we fucking handed Glen Benton his ass every night of the tour and he couldn't keep up. Benton and his caravan of mini-van drivers couldn't touch our live show—even on our worst night. "Benton sent Shaun Glass a text last night, threatening to break his jaw if Shaun badmouthed Benton. Well, I'm calling Benton out right now because his bullshit is old, fake, and he ain't scaring anyone. Glen Benton is a lazy, jealous, jaded, ungrateful, unprofessional, egomaniacal bully. He menaces everyone from bands and fans, to promoters and booking agents. How he maintains a career is beyond me. And this time, he fucked with the wrong band. Karma is a bitch, Benton. "On behalf of Broken Hope, I'm sorry to the fans who won't see our performances in Dallas and Austin. You all know it's not our fault... we'd give you all a free show if we could. Thank you all for the support, for coming to our shows, for all the love you've given our "Omen Of Disease" album, and for understanding the bullshit and temper tantrums we've had to put up with on this tour."