Monday, September 23, 2013 12:01 PM PT / 3,589 views
Official press release: Metal legends Deicide will release 'In the Minds of Evil' November 25 in North America via Century Media Records, and frontman and founding member Glen Benton couldn't be more proud of his latest offering of evil incarnate. "Do you hear that? It's the sound of Satan singing along to the new Deicide!" boasts Benton of the new release, adding that "'In the Minds of Evil' is like King Kong taking a shit on a daisy." 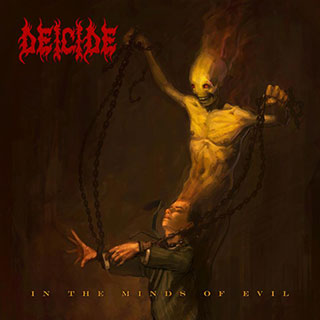 The album is the eleventh studio recording of an illustrious career spanning more than 25 years, and is produced by Jason Suecoff (All That Remains, Trivium, Death Angel). The album's jarring cover was taken from Australian artist Simon Cowell's painting "Power Of The Mind" and offers a fitting face to the album's 11 tracks. 01. In The Minds Of Evil 02. Thou Begone 03. Godkill 04. Beyond Salvation 05. Misery Of One 06. Between The Flesh And The Void 07. Even The Gods Can Bleed 08. Trample The Cross 09. Fallen To Silence 10. Kill The Light Of Christ 11. End The Wrath Of God

flat billed hats and gym shorts are not stoked.

Give it a rest Benton, no one thinks you're edgy anymore

Satan is not even stoked.

Didn't like their last album. Loved the three before that. Stoked for this. That album art is sick. Deicide is sick. You're all gays.

Simon Cowell did the artwork? Why isn't Benton a judge on American Idol then?

That idiot from American idol inspired the album cover?

Old and irrelevant but better than any gay deathcore gayness

So, does he not like god or something? Is he gonna talk about it

i keep my bible in a pool of blood, while listening to Deicide

Burton is as pretentious as the Christian metal dudes.

say what you will about glen benton, at least his press releases are better than converge's 20 paragraphs of pretentious bullshit

^ That's not saying much. Getting castrated is probably more entertaining than a Converge press release.

band rules you all can go die

This band has been at it since the genre first came about and is still going strong. fck anyone who wants to talk shit. Glen has stayed true to himself throughout the years and his work in Vital Remains kicked ass as well.