Down To Nothing announces new album

Tue, July 2, 2013 1:55 PM PT4,706 views
Official press release: Down To Nothing started from humble beginnings at the turn of the millennium, with little more than writing songs and playing shows in mind. Thirteen years later, three full-length albums, eight EP's and one compilation later, Down To Nothing are one of the most recognized bands associated with the Richmond straight edge scene. Having toured North America, Europe and Australia several times over meanwhile sharing the stage with the likes of Bane, Champion and Terror to name a few, it's no wonder their live shows are infamous for their faced paced and high energy. Life On The James is Down To Nothing's long-awaited next full-length installment to their already impressive discography. 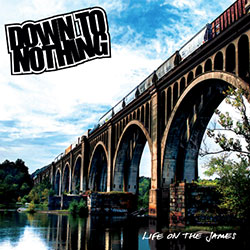 Produced by Nick Jett (Terror), Life On The James is "…an album concept we've wanted to create for a long time", explains DTN bassist Jared Carman. "There is a level of hometown pride we've seen among all the cities we've played. The foundation of this album is something anyone can relate to, while the tracks themselves are very personal to the band", he continued. The album was preceded by the Greetings From Richmond, Virginia 7inch this past spring, which featured two LP tracks and one exclusive. Now, finally, Down To Nothing's first full-length record in five years is set to hit stores on September 10th from Revelation Records. Stay tuned for track premieres, video premieres, and more information coming very soon. Life On The James track listing: 01. When I Rust I Rust 02. Dirty South 03. Life On The James 04. Sheffield 05. No Leash 06. 3:24 07. Brothers Turned Strangers 08. Island Time 09. Cardinal 10. Soak It Up 11. Fish Ain't Bitin' 12. Draw 4