We're not sure if this is really happening, but we're hopeful. Either way, Riley Breckenridge, drummer for Thrice, has revealed that he's started a side-project with Mike Minnick (Curl Up And Die) and Jon Howell (Kowloon Walled City) called Puig Destroyer. For those confused, Breckenridge is an avid baseball fan, and Yasiel Puig is a member of the Los Angeles Dodgers. Here's the official word:
"Puig Destroyer is actually happening. It's a baseball-themed grindcore project featuring Mike Minnick (Curl Up & Die) on vocals, Ian Miller and Jon Howell (Kowloon Walled City) and me (Riley Breckenridge - Thrice) doing drum programming (because logistics and gah … blastbeats at 220 bpm). "We've got basic tracking done for our debut EP, and we should have a track from said EP fairly soon. Please stay tuned for updates/tunes. The roughs I've heard are ridiculously awesome and fun and raw as all hell. "Kinda like Yasiel Puig. "We're all very excited and hope that you are too."
UPDATE: Puig Destroyer has now released their first song: 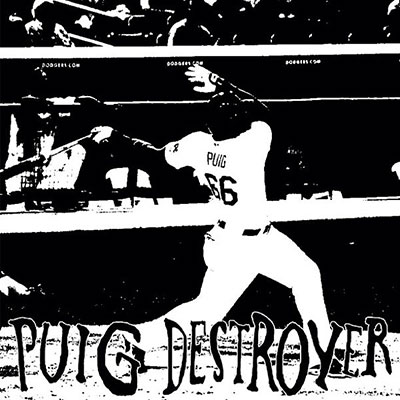