The Dillinger Escape Plan has cancelled their summer tour dates in Europe due to the broken hand recently suffered by guitarist Ben Weinman. According to Metal Insider, Weinman will be undergo hand surgery on Thursday. Weinman hopes to begin playing guitar just a few weeks following surgery, which will enable Dillinger to still appear on the Summer Slaughter Tour as scheduled. 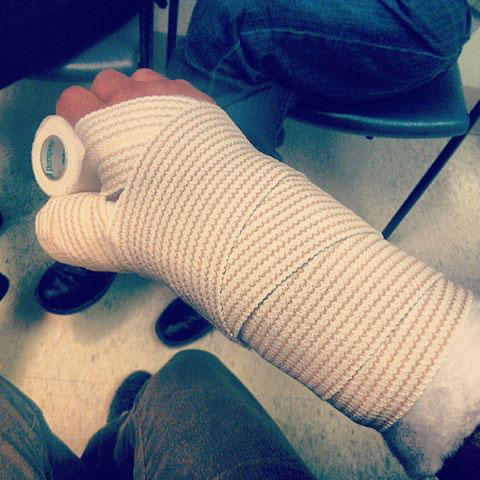 UPDATE: The band has subsequently issued the following statement:
The Dillinger Escape Plan regretfully must cancel their upcoming summer European festival and club appearances due to an injury sustained by guitarist and co-founder Ben Weinman on his right hand and wrist. He will spend June recovering. "I'm heartbroken that we will miss these shows because we were all looking forward to them a great deal," Weinman said. "Obviously nobody likes being injured. I'm looking forward to performing on Summer Slaughter at full capacity and we will be back in Europe this fall on our headlining tour." The Dillinger Escape Plan performed at Metallica's Orion Music & More festival over the weekend, where Metallica's Robert Trujillo was kind enough to give Ben a chair to watch and heckle the rest of his band during the set. Dillinger is touring behind their new album "One of Us is the Killer" which debuted at #1 on the US heavy music chart. They recently completed a video for the album's title track which will be released in the coming weeks. "Leaving for tour knowing that we would be performing without all members on stage isn't something any of us are comfortable with," added frontman Greg Puciato. "Ben is going to take the next month to heal and we'll be ready to demolish Summer Slaughter and return to Europe in the fall with all systems loaded and ready to go."