Thursday, May 23, 2013 9:03 AM PT / 2,578 views
Official press release: Revocation have confirmed an August 6th release date for their new self-titled album via Relapse Records. This is their 4th full-length release and the first featuring new bassist Brett Bamberger. Today the band has unveiled the artwork and tracklisting for the album. The artwork was created by Orion Landau (Dying Fetus, Obscura, Nile). 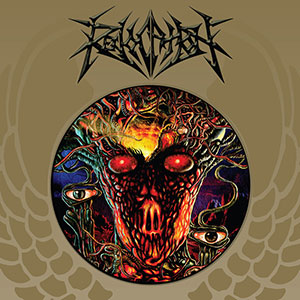 Throughout the recording process the band had cameras rolling capturing everything. From this footage Revocation has put together a series of videos detailing different aspects of the recording process. The first in-studio video focuses on the drums and bass and can be viewed here. Additionally the clip features 10 seconds of new Revocation music. The second video in the series focusing on the guitar and bass tracking and features 10 seconds of brand new Revocation material. Check it out here. Revocation will be taking part in this year's Summer Slaughter Tour, alongside the likes of Dillinger Escape Plan, Cattle Decapitation and others. The tour starts July 19th in San Francisco, CA and runs through August 20th in Portland, OR. In addition to the Summer Slaughter dates, the band has announced a handful of headline shows leading up to the Summer Slaughter and immediately following the tour. Revocation track listing: 01. The Hive 02. Scattering the Flock 03. Arch Fiend 04. Numbing Agents 05. Fracked 06. The Gift You Gave 07. Invidious 08. Spastic 09. Entombed By Wealth 10. A Visitation