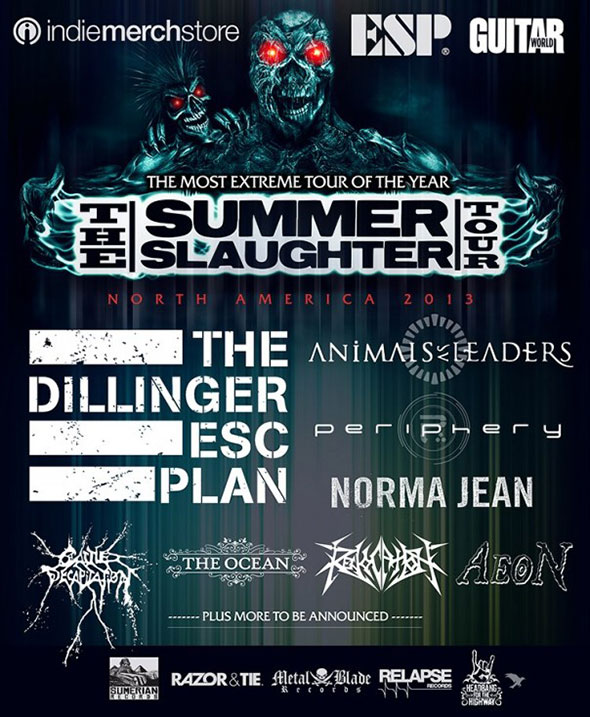 Going for Dillinger, Cattle Decap, and Revo. Periphery can die.

Norma Jean and Periphery? Are you fckING kidding me?

shut the fck up Reid.

Periphery can suck on my tiny little Bulb. And swallow.

The Summer Shit Tour 2013. All this needs to be shittier is have the Browning on it. gayy ass band.

this lineup is a joke. i thought this was a death metal tour?

will go for Aeon only. Then leave with a scene girl with her lips on my c-ck

No one is stoked.

"will go for Aeon only. Then leave with a scene girl with her lips on my c-ck" ^This

the too many notes tour...

Wow Ash this is the stupidest tour line up ever, minus Cattle D. Periphery? AAL? How the fck is that death metal? Whatever, not spending a dime on this lame tour.

Would have loved to see Black Breath, The Acacia Strain, Nails, Legion, or Fleshgod Apocalypse!

this is the weirdest summer slaughter lineup ever

AEON!!!... Cattle decap and Revocation... and some other bands.

AEON is the only sick band in this pssy festival

Periphery SUCKS!! Get Animals out of there too (I like em btw). I just think that Dillinger as far as Off Time/Math Metal/Djenty groups go, that AAL and Mansoor and co. Just cant live up.

There are too many hipsters in this scene. Look at the other comments.

Seriously, it's Dillinger, AAL, Norma Jean, Cattle Decap, The Ocean, Revocation, and Aeon. How are you all hating on this lineup? Because Periphery is on it? Yeah you all can sck a dck.

NO DEATHCORE? That makes me sad.

SO TIRED of seeing Dillinger playing every fcking fest. Ugh.

Memphis Will Be Laid To Waste is the greatest song ever

You guys used to like Norma Jean stop lying to yourself

If cattle decap, Aeon and revocation weren't on, I would have mistaken this for a warped tour announcement.

To heavy for me. When can we have a real tour with sugarcult, Taking Back Sunday and some other great bands like them. This tour will rot your brain.

AEON will murder Norma Jean and there lame Christian beliefs

Isn't Gojira supposed to co-headline this?

Oh, and Periphery sucks so much they make the Dalai Lama cry.

DEP= Shitty music for people who think they listen to heavy music ^^^ Did not attend Mr. Bungle/DEP tour in 1999. Has never seen DEP live. Is poser high school kid.

wow. Only going for cattle decap, Aeon, And revocation. Leaving after.. and i hope they all play for more than fcking 10 minutes. damn i remember when summer slaughter had good lineups.. what happened?

"DEP= Shitty music for people who think they listen to heavy music ^^^ Did not attend Mr. Bungle/DEP tour in 1999. Has never seen DEP live. Is poser high school kid." Greg?? is that you??

Now when they say "plus more to be announced", does that mean just a voted opener or other bands too? Because this lineup is very, very weak so far

2 summer slaughters in a row that are not worth going

I never though I'd see the day where I can totally agree with Lambgoat users. Periphery is ass, AAL sucks for the most part, DEP doesn't belong here, neither does Norma Jean. Profit flip.

I rather bag scene bitches at warped tour and make them watch Black Dahlia Murder "THAN"<---- you forgot a word in your sentence, good luck on your G.E.D. test... go see this skinny tight jean sausage fest. ^THIS RIGHT HERE!!!^

I rather bag scene bitches at warped tour and make them watch Black Dahlia Murder "THAN"<---- you forgot a word in your sentence, good luck on your G.E.D. test... go see this skinny tight jean sausage fest.

"i'd rather bag scene bitches at warped tour and make them watch Black Dahlia Murder "THAN"<---- you forgot two word(s) in your sentence, good luck on your G.E.D. test... go see this skinny tight jean sausage fest.

I don't care what kind of music is "supposed" to be on this tour. I have listened to DEP for ten years and I have never had the chance to see them. I also love AAL and Cattle Decap. Im stoked as fck!

lambgoat users will never be happy with any news posted on the site.

Stoked stokeds are stoked for stoked

"Let the underground give me dollars!"

I wish Karp was still around...

summer slaughter is usually known for their decent lineups but this is laughable. terrible lineup

I think this line up fcking destroys. Talking shit on these bands just shows that you're limiting your musical spectrum and bitching like a child. For those who dump on periphery, matt halpern. Have a more wide appreciation for musical talent. I guarantee NONE of you have put forth half as much effort into becoming a seasonedmmusician as any memeber of any of these bands. Hate the bands? Think they sound like shit? Start writing better musis and then you wont have to worry about them anymore.

the acacia strain should be playing....

cattle decapitation are a bunch of irl gays