Wednesday, August 15, 2012 7:42 AM PT / 13,388 views
Baroness, currently on tour in Europe, was apparently involved in a bus crash near Bath, England earlier today. The band's bus reportedly veered off the road and plunged roughly 30 feet. Reports indicate that both the driver and a passenger were trapped in the vehicle and had to be freed by emergency personnel. All passengers were taken to the hospital, with the two trapped occupants reportedly injured seriously. We'll keep you posted. 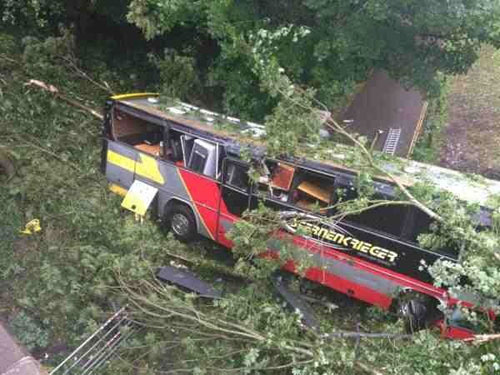 UPDATE #1 The BBC had the following to say:
The fire service said both of the trapped victims had now been released by firefighters. "Those people are now being treated by ambulance staff," a spokesman said "There were seven other passengers on board the coach, who have also been receiving medical treatment."
UPDATE #2: The following statement has been issued: "Baroness were in a serious bus accident last night near Bath, England. The band members and crew are recovering at local hospitals. All tour dates are postponed until further notice." UPDATE #3: The band has issued another statement with details regarding their injuries (3 members remain in the hospital). You can read that here.