Official press release: After releasing an amped-up cover of a holiday classic in each of the past four years, genre giants August Burns Red are officially announcing details on their oft-rumored full-length Christmas album: August Burns Red presents: Sleddin' Hill, A Holiday Album. The 13-track release features not only fresh takes on classics such as "Jingle Bells," "Winter Wonderland" and even "Rudolph The Red Nosed Reindeer," but also original compositions that are destined to become future headbanging holiday favorites. The album also compiles remixed and remastered versions of the band's previous holiday hits, like "O Come, O Come Emmanuel," "God Rest Ye Merry Gentlemen" and "Little Drummer Boy." Rounding out the collection is an updated version of the band's rendition of "Carol of the Bells," heard in Frank Miller's (300, Sin City) movie The Spirit and Seth MacFarlane's (Family Guy) American Dad. "The idea of doing a full Christmas album has been floating around in the ABR camp for a few years now, but what always held us back was finding the time and energy to write an additional full-length in between touring and writing our regular records," explains guitarist and principle songwriter JB Brubaker. "After finishing [2011's] Leveler I finally felt inspired enough to tackle the Christmas album idea." 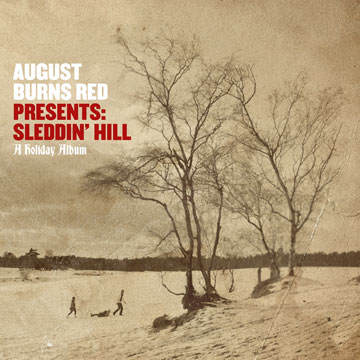 After working with some of the biggest producers in the genre, the band chose to come home and work at Lancaster's Atrium Audio with longtime friends Carson Slovak and Grant McFarland on Sleddin' Hill, which finds ABR at its most ambitious and creative. It's a work that enhances the guitar and drum mastery August Burns Red are known for by adding unexpected elements such as banjo, violin, cello, piano and even horns. "Because this was such a different type of album, I was able to get a little more wild with my influences," confesses Brubaker. "There's a section inspired by one of my favorite bands, Beirut. There's also guitar solo that is an ode to Blue Album-era Weezer, and my punk roots are evident all over the album." "Writing metal versions of Christmas songs has always been a challenge for me because the songs are driven by simple vocal melodies with the only variety in the lyrics. We decided to take the songs and go the instrumental route - the main melodies are there, but this record has a lot more to it then that," he adds. "The songs have sections of music that flow in and out of the classic melodies we've all come to recognize. There is a lot of substance in these songs- more than you'd find in your typical cover." On whether Sleddin' Hill is destined to become a novelty album or a key part of the band's discography, Brubaker has the final word: "To some, the concept of a metal Christmas album may come off as silly and a waste of time, but I think this record has plenty of original ABR substance to interest even the biggest Scrooges out there." Track listing for August Burns Red presents: Sleddin' Hill, A Holiday Album: 01. Flurries 02. Frosty the Snowman 03. Sleigh Ride 04. God Rest Ye' Merry Gentlemen 05. Jingle Bells 06. Oh Holy Night 07. Rudolph the Red Nosed Reindeer 08. Sleddin' Hill 09. Little Drummer Boy 10. Winter Wonderland 11. O Come, O Come Emmanuel 12. Carol of the Bells (2012) 13. We Wish You a Merry Christmas