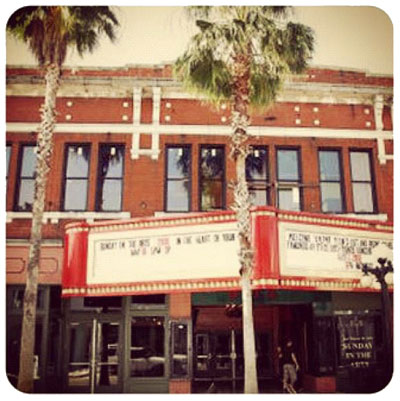 Though no further details were provided, that photo most definitely shows the Ritz Theatre in Tampa. Previous Scion Rock Fest events have all taken place on a Saturday, and were officially announced about a month prior to the shows. As such, we speculate that Scion Rock Fest 2012 will take place on June 2nd, since the venue is booked that day for an undisclosed event. Either way, we do know one thing: Eyehategod will not be performing. The band posted the following just hours ago via Facebook: "Eyehategod officially banned by Scion!!"

Ybor city is a festering shitdick

LOL every fest announcement should just provide a list of bands that are NOT playing. much more interesting that way. keeps people guessing.

I heard the refused are playing this

anonymous 0 seconds ago I heard the refused are playing this ...but did you hear it from a very reliable source?

"...but did you hear it from a very reliable source?" Apparently not. This guy is not to be trusted.

Scott Kelly is STOKED and will arriving via loaned Scion.

all shall perish will probably play. scion sponsors them alot, like music video for "royalty into exile" and the spanish version of the track "the past will haunt us"

Down not happening No Asp either Probably going to be Nuclear Blast bands....

Nachtmystium will be headlining most likely, right?

Will be there for Eyehategod.

think merch sales people are bad, wait til the Scion reps tackle you to check out their 2013 XB

"think merch sales people are bad, wait til the Scion reps tackle you to check out their 2013 XB" Have you ever been to a Scion Rock Fest before? You barely even see the Scion logo anywhere, much less get accosted by car salesmen to buy their cars. They've never even had a single car parked on site.

the first scion rock fest in atlanta was fantastic. The scion logo wasn't shoved down your throat, the venue was perfect for such a large show, and it being 18+ kept those youngins away. Let's hope this years lineup isn't a bunch of shitty hyped up deathcore bands.

^knowing the tampa scene it will be

what do you know about the Tampa scene? That they have one of the richest histories of metal in the entire world? I'm willing to bet that you don't know that based on your stupid comment. Look it up dumbass, before you start running your fingers off.

Who's driving a Scion into the pit?

Rumor has it SLEEP is headlining...

This looks like its going to be incredible! I am so glad I live in Sarasota! Scion rules!