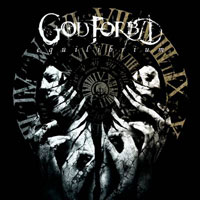 For over fifteen years, the forerunners of the New Wave of American metal have achieved high praise from fans and critics alike over their career while maintaining an insatiable hunger to expand their songwriting horizons. "With the new album, we focused on writing tight, hook-y metal songs," commented guitarist/vocalist Doc Coyle on the creative process for Equilibrium, "There are some really fast, super heavy, groovy songs – some of the catchiest, most melodic songs we've ever written. We wanted a modern, but organic-sounding album that was tight but still captured the intensity of the band. The album sounds huge!" Coyle went on to speak about the overall theme of the album, "The title of the album says it all – it's about finding your way when you're lost. The lyrics come from a very personal, very real place. The recurring lyrical theme is about the everyday struggles of life and what it takes to persevere and follow your dreams." God Forbid's solidified line-up, newly managed under World Entertainment's Alexander Ford and Gunter Ford, includes lead vocalist Byron Davis, guitarist/vocalist Doc Coyle, bassist John "Beeker" Outcalt, Corey Pierce on drums and newest member Matt Wicklund on guitar. The band will support Equilibrium with heavy touring.