Tuesday, January 24, 2012 5:50 AM PT / 8,206 views
Sumerian Records has announced plans to release a free digital mix-tape titled The Sumerian Mixtape: Volume 1. A street date has yet to be announced, but the release will feature new, unreleased music from The Faceless, Periphery, Veil of Maya, I See Stars, Stick To Your Guns, Make Me Famous, Upon A Burning Body, T.R.A.M., The Haarp Machine, and I, The Breather in addition to several other yet-to-be announced participants. 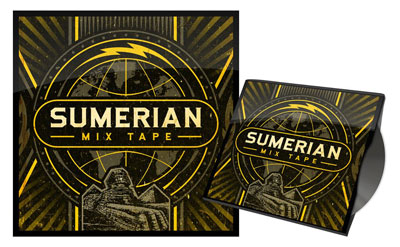 That's what she said.

I hope Def Leppard is on this.

Biohazard should be on this

so wait is it digital, but with a picture of a cd and sleeve? is it just mp3's with a "street date"? DA fck

will download for new Faceless track, otherwise it's a shit fest

Yo yo yo I got that new Sumerian mixtape muthafckas, let's pop that shit in and ride out!

Loyd is the only one who took the time to log in ha.

If it's not on a cassette, it's not a mixtape.

sumerian records plays on photoshop for a little while, tells lambgoat.

oh so it's a sampler? or is ash going to be yelling "N-N-N-NEW SHIT" every 30 seconds over the songs?

theres is nothing tape about this "mix tape" i was hoping they were issuing a tape with their supreme budgets of over edited noise.

50 Cent,Three Six Mafia and Lil Jon should be on this shit. YYYEEEEEAAAAAAAAAAHHHH. Lets get crunk up in dis muthaf*ka.

^ boooooo. crunk is old, bring that new shit. who says "holy crap a mixtape, i know what im listening to in the bathroom while powering out a deuce"?

I bet all of the NOW:thats what I call music mixtapes are better than this shit.

unless there is sparatic lazer effects and a jamacian guy yelling "bwop bwop", this is NOT a mixtape

Who gives a fck what medium it's on? Everything ends up a free digital download one way or another. Stoked for all this new material.

I'm gonna do a drive by while bumping dis shit. If I get caught I'll just say it's not me fault, The Mixtape made me do.

Korn should do a remix of this mixtape. That would be da coolest shit evaa yoo.

whether you like this music or not, its cool to see a label get in touch with the roots of this scene. before the music internet holocaust, label comps like this was how i heard of bands in highschool. respect for making it free

Not a single one of you is funny.

"Free mixtape implies people were paying for it originally... L O L." No, it doesn't

anonymous 15 hours ago whether you like this music or not, its cool to see a label get in touch with the roots of this scene. before the music internet holocaust, label comps like this was how i heard of bands in highschool. respect for making it free ^free samplers were the shit in high school Strength To Prevail FACEDOWN/BLOOD&INK split all day.

will fap to this

C.S. Scriblerius ,The Writer Without a Face One of those cases is certainly the author C.S. Scriblerius, who as a writer very little is known. He strolls in a universe of adventures and magical and unknown regions, walks in search of supernatural events and plunges headlong into the deep gray waters of magic and mystery through his travels MAGICAL MYSTERY TRAVEL.