Bring Me The Horizon involved in another fight

Bring Me The Horizon guitarist Jona Weinhofen apparently broke his hand during little scrap with a member of the crowd during the band's November 6th show in Helsinki, Finland (BMTH was opening for Machine Head). Check out the fan-filmed video below. At the beginning of the video (look in the lower left-hand corner) you can see frontman Oliver Sykes throwing punches (for reasons we won't begin to attempt to explain). It appears that Weinhofen (with the cap on) then jumped into the fray, though it's difficult to see exactly what transpires at that point. Frankly, my head hurts after watching the video a few times to figure things out. Whatever happened, Weinhofen seems to have injured himself as he subsequently visited a hospital and later Tweeted the following: "Broke my hand...bummed!" The Tweet was accompanied by the following photograph: 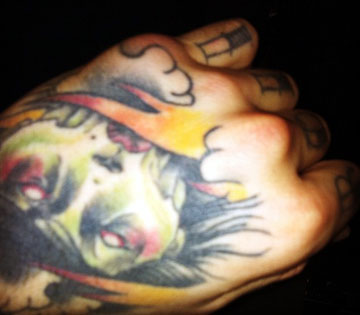 This is the second incident involving violence between members of Bring Me The Horizon and concert-goers in recent weeks, as Sykes was attacked during a performance in Salt Lake City, UT last month.