Bring Me The Horizon drummer Matt Nicholls has broken his hand and will be forced to miss the remainder of the group's UK tour. Nicholls, who reportedly suffered the injury playing soccer, will be replaced by Architects drummer Dan Searle. BMTH frontman Oli Sykes had the following to say: "So Matt's broken his hand! Fuck! But do not fear! All shows are going ahead with Dan of Architects taking the role of drumming. Matt, as are we, are all gutted that he can't be a part of these huge shows. But we're just happy we don't have to cancel! We will see you at the shows!" 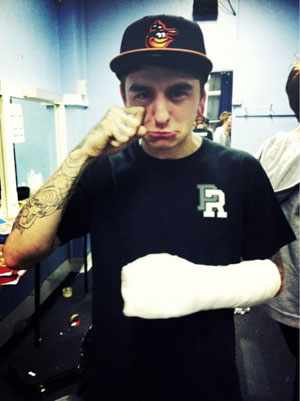