Unearth has commenced recording for their next album. The group has issued the following: "We wanted to let everyone know that tracking for the new album has officially begun! We're currently at Zing Studios in Westfield, MA tracking drums with our sit in drummer for the album Justin Foley of Killswitch Engage/Blood Has Been Shed. Foley was an obvious choice for this album for many reasons, but mainly because of his abilities and knowledge of heavy music as well as his long time friendship with the band. A decade plus of friendship has made this an easy transition for the band, Foley and our producer/engineer Adam D. "In other news, we have decided to change the mixing engineer for the album to Mark Lewis (The Black Dahlia Murder, White Chapel, Devil Driver, Trivium, etc...) from Audiohammer Studios. Mark is another long time friend of the band and we're excited to hear what he can do with our sound on record. "Guitarist Buz McGrath added this irrelevant comment about working with Mark, 'Mark Lewis mixed me a drink once and i woke up in a swamp covered in anti freeze.' "As we said before, we're aiming at a mid to late June release for the album followed by massive World touring. "Below is a snapshot of the hard drive of the tunes being tracked (just working titles ofcourse)." 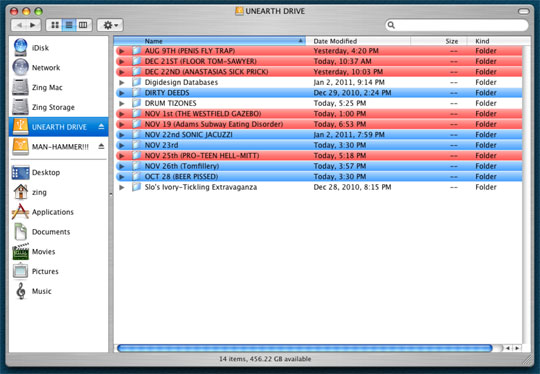 dundun dunduns from 2004 are fcking stoked

glad they're getting someone else to mix it, won't sound as terrible

new mixer and a ginger on the drums? breakout the sunscreen. seriously, that dude is one of the best in heavy music

is that snapshot to prove that they are actually doing something?

Ugh, this press release should have been edited for Lambgoat readers after it left the Hot Topic board. SIC SONG TITLES BROS, ROFLZ.

lol @ MAC. This album will be to other albums as MACs are to PCs.

how many times can you rehash the same idea. here we go again.

Nice screen cap, bro! What kind of sick graphics card are you rockin to support a whoppin' 640x480?!? SVGA, nigga!

windows seven is not stoked.

Stings of Conscience was awesome back in the day. Haven't listened to anything since, for a reason I don't know. Maybe I'll check it out.