This year's Sound and Fury Festival in Santa Barbara, California apparently ended in a bit of chaos yesterday as day three of the festival was shut down following a small riot. What really happened isn't exactly clear, but according to Santa Barbara Sheriff's Department, a "large fight" erupted at roughly 6:20pm. Strangely, it seems that the ruckus was partially precipated by someone riding a motorcycle into the pit area of the Earl Warren Showgrounds during a set by New York hardcore band Backtrack. 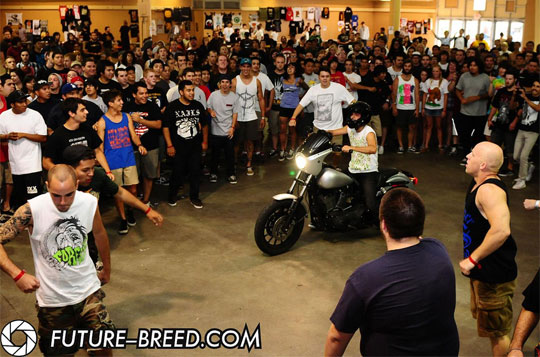 Officers ultimately shut the show down, preventing a handful of bands from taking the stage. Among those that did not get to perform were Earth Crisis, Bane, Bracewar, Foundation, and Defeater. Several hundred festival attendees did eventually make their way to an impromptu house show in Oxnard, where Foundation, Bracewar, and others played. Unfortunately, that show was shut down by the Ventura County Sheriff's Department after neighbors reported noise and loitering. The host was later arrested for violating a noise ordinance. Update: Sound and Fury organizers have issued a statement.