Official press release: Today's premiere hardcore band, Comeback Kid prepares for the release of their fourth studio album Symptoms + Cures on August 31. Produced by Eric Ratz (Cancer Bats, Billy Talent) and Kenny Luong (Cancer Bats, Billy Talent), Symptoms + Cures features 11 mind-blowing tracks assured to please. Drummer Kyle Profeta states, "Our last album was more of a 'feeler.' We were just getting in the mode of Andrew becoming our front man. With Symptoms + Cures, we have really found our sound with him and we are all really excited about it." 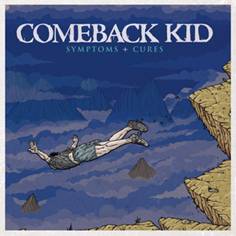 Fans can get a taste of the new record by visiting the band's MySpace page. The new album, Symptoms + Cures is available in a variety of pre-order packages including the physical album, a limited edition t-shirt, and three separate vinyl colors. In addition, a specially-enhanced CD is available including mixes without vocals, guitars, drums, or bass tracks for all 11 songs, allowing fans to play along with the record. These pre-order packages are available exclusively through the Victory Records web store. In support of the new album, Comeback Kid will be touring all over the world. After playing a small string of festivals in August, the band begins "Through The Noise," their headlining Canadian tour. Directly after the headlining run, Comeback Kid begins "The Imperial Never Say Die!" tour, taking them across Europe. Details on a very special US tour will also be announced shortly, so be on the lookout!