Tuesday, November 3, 2009 8:18 AM PT / 13,299 views
Official press release: Burning Empires is a new project featuring Andy Hurley of Fall Out Boy, Stu Ross, Ryan Morgan, and Kyle Johnson of Misery Signals and Matt Mixon of 7 Angels 7 Plagues. Unlike their other projects, BE is a crusty hard-charging hardcore punk with nary a melodic or metal shred in site. The bulk of the songwriting is done by Ross and lyrics are by Morgan who handles vocals (unlike his guitar position in Misery Signals). Ross says of the band "musically I wanted to do a band in relation to Misery Signals, a more punky hardcore version of what we were doing influenced by bands like Propaghandi, Comeback Kid and Cursed. Basically whenever we write a song we live by the mantra fast, pissed and evil." Lyrically speaking Morgan adds "I find this group is more socially charged than what we've done in Misery Signals. A lot of my lyrics up to this point on the Burning Empires material is anti-civilization. Whether it be questioning the role of technology and domestication, or examing the coercion built into social hierachy. Burning Empires definitely taps into what got us excited about hardcore, which to me was music that was armed with a message of awareness." The group has a 7" set to be released November 10th via their own FC Records. 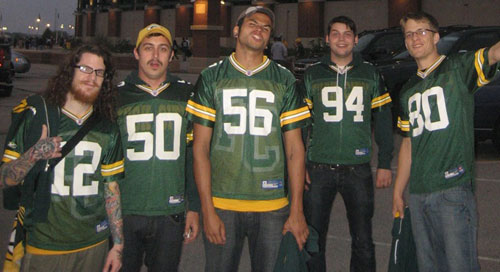 Later this month the band will head to DC to record with Mike Schleibaum (Darkest Hour) for an EP to be released in early 2010. Also confirmed is an Australian tour in January with Aussie acts The Amity Affliction and Break Even with more dates to be announced soon. All members of Burning Empires also share a house in Milwaukee, WI where BE is just one of several projects the housemates are working on. Ross says "We all have outboard gear or Mac recording equipment so we're all in our rooms playing music all day and Matt is a DJ so it's pretty much noise all day." Then there's the fashion line, no really Fuck City hoodies and shirts. Hurley says "We had to change the name of the site to from fuckcity.com to fc666.com because kids couldn't access it from school or the library due to program restrictions. I actually can't access it from town because the public wi-fi has restrictions." Of the name Hurley says "We're like kids where we name everything, like my last house had a name, our backyard has a name, we just gave the house the name Fuck City, (a reference to the highly subversial TV series Arrested Development). Kyle made hoodies for all of the housemates in Green Bay Packer colors (the boys regularly play flag football when home). People kept asking us where they could buy them when we went out so we just decided to start making clothes." The line is premiering three new shirt designs this season which the guys describe as their "evil crust punk looking shit."