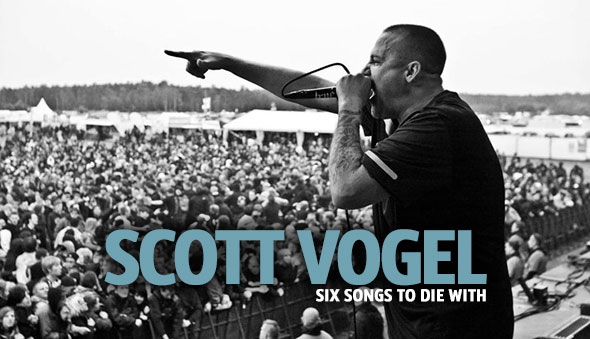 If you don't know who Scott Vogel is, you either never listened to hardcore, or you stopped listening to hardcore in 1995. During the past 20 years or so Vogel has done time in several bands, including Slugfest, Despair, and Buried Alive. And of course since 2002 he has fronted popular Los Angeles, CA hardcore outfit Terror. Known for both his dedication to hardcore and his on-stage banter, Scott Vogel is a scene icon, and seemed like a logical subject for Six Songs To Die With.


Scott Vogel: When I was young, and I mean young, I was passed down Black Sabbath's self-titled album and Paranoid on vinyl. I listened to them and looked at the art and photos but I don't think I could have possibley understood what I was really holding in my hands. In my opinion Black Sabbath is ground zero for everything heavy. Everything hard. Everything metal. Musical damage is what they brought to the table.

Me, my brother and a friend would get fucked up and watch their live videos. Again, capturing exactly what I wanted out of an aggresive band. Black sabbath. Great song writing. Great players. Lyrical mayhem. An essence and aura to keep you on your toes. Music that goes for the throat. And this song showcases it all.

This is where it all started for me. The path was paved to ruin my life or save it whatever way you wanna look at it - by Black Sabbath.


Scott Vogel: To me Madball is the defination of hardcore. They are the real thing, on and off the stage. They live in the underworld. They aren't trying to be anything, they aren't putting on a front, they are Madball and they are one of my favorite bands.

Madball has amazing records. A great live show with Freddy being one of the best frontmen I've seen in any form of music. They have a style many try to imitate but most look weak and forced. And if you take some time and actually listen to them, they can play. They are musicians.

Music to me has a lot to do with moods. You listen to different things when you feel certain ways or wanna find an escape or strike a feeling. Madball is aggressive and energy driven but in a precious and targeted way that comes off uplifting and motivating to me. This is my favorite song by them.


Scott Vogel: This is the battle song to end all other battle songs. A diss track more powerful than I've ever heard before. Jay Z was knocked out by Ether. From the first line to the last, Nas' lyrics over a pounding Ron Browz beat - pretty much dropped jaws and showcased a talent that had been missing on his previous few records.

I love Queensbridge rappers. Mobb Deep. CNN. Tragedy Khadafi. Littles. Blaq Poet. There is something about their style, flow and story telling that always appealed to me. But Nas was always one step ahead of the rest.

He's had some records that haven't been good. His newer stuff doesn't get that much play from me. But I still would say he's the greatest of all time. He and Jay-Z battled toe to toe and everyone knows Jay Z is no joke, but with this song, Nas still held the crown.


Scott Vogel: I'd say Hot Water Music is my favorite band. They have a fucking great back catalogue; they put on an awesome show; they have lyrics that are saying something positive and thought provoking and from what I know, they seem to be pretty fucking cool people. I've seem them live at arenas and months later play a tiny club packed with 300 people. And it's always just raw true energy.

Truth be told, I didn't like them when I first heard them. At all. I thought they were bad and boring and I don't know, not for me. But the guys in Buried Alive played them in the van a lot. And this one song caught me. And I wanted to hear it more. We all lived in an apartment together in Buffalo and I would go into their rooms and listen to their HWM cassettes when no one was around. And after a while I was hooked and had to admit I was wrong. This is that song.


Scott Vogel: One thing I love about Tom Petty is he has no look, gimmick or any bullshit. He's just him and he fucking writes amazing songs. His songs seem to be so basic and that somehow makes them the catchiest things on earth. I listen to Tom Petty more than any other artist I would say.

Tom Petty kinda has this male pride thing in lot of his songs. Sort of the underdogs cry for a man. I had a good friend in Europe lose his girl suddenly and his life was pretty much in turmoil. Living situation up in the air, future plans shattered and a broken heart. I told him he needed to listen to Tom Petty. He said who? I told him to check him out. Fast forward 8 months later and I'm back in Europe with the same friend. He's doing better, life's looking up. He gets a phone call and the ring tone on his phone is a Tom Petty song. Haaaaaa! I'll never forget that, we laughed so hard. Music mends and heals. It's fucking incredible.


Scott Vogel: There is something about this band that can't really be put into words. Start Today is a HC masterpiece. It's simple in every way. The songs and structure. The lyric topics. The cover art. It's all your basic formula. But it's beautiful and true and honest and you can feel the energy and soul of this band in every word and song.

I will always have a soft spot for the Rev back catalogue, New Age Records and early Victory Records stuff. I listen and love new bands and all sorts of music but there is just something about late 80's and early 90's HC. And especially NYHC. How the fuck could so many amazing bands with different styles and sounds come from one place at the same time? It's un-fucking-believable. I'm so glad I grew up in Buffalo and got to witness so many amazing bands. GB. Raw Deal. Brotherhood. The Accused. Decided. Integrity. The Dead Milkmen. Burn. Descendents. Samiam. Cannibal Corpse. Tool to about 50 people. I love underground music. I love going to shows. I love being able to do this for my so called living.

And to think I was considering listing a Coldplay song last insted of GB...

now he should work on the dying part

Respect to scott, respect to all kinds of great music

Talking with him often enough I'd figure he'd say, Gang Starr and Warzone in that list.

who are these people writing comments? Who questions nas and madball? Solid list have every band on my ipod except sabbath

nas and madball......this is the vocalist of Terror.... what were you expecting? tom petty and black sabbath?..... oh wait... no one was actually expecting that. all very good songs though, New Direction and Ether being two of my all time favorites.

Ether is one of the worst Nas songs ever.

Ether is Nas' worst song? Except for how it's like top 5 beef songs of all time.

for F sake stop bitching about this. People will Always experience different styles/genres in music. And the good, they stick on to ya. Don't try to prove a point, like you guys only listen to hardcore, and have no other songs outside of hardcore you like/liked. Don't be a dummy, aight?

wait...so Scott is not the vocalist of Emmure?!?! and I thought i was following Emmure for scott vogel....

lol at the fact this only has like 12 comments.

Only good song he listed is Ball Of Destruction. Nas is weak shit, so many other rappers he could have named. He prob only listens to Jay-z and Nas though

this man is the epitome of retarded. anyone that spells "definitely" "definately" should be shot on sight.

f*ck your favorite band you gays. HOT WATER MUSIC shots all over them.

the ghost inside should of been on his list.

Considering how much this guy and his band likes to brown nose Warzone and Raybeez (especially to sell kids shit they have no idea about) I'm quite surprised not to see one of their songs on this list (or am I?).

so surprised Faith and Forgiveness isn't one of them

Hot Water Music! And Samiam! Holy shit, Samiam. Who would have thought?