Dani Filth (Cradle of Filth): Six Songs To Die With 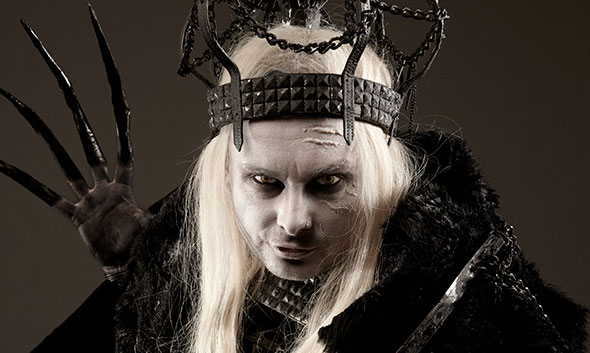 If you haven't heard of English extreme metal band Cradle of Filth, you're probably under the age of 10 and don't listen to metal. They've been performing since 1991, and have released a large handful of albums, including metal "hits" with Sony Records and Roadrunner Records. Of course, when you think of Cradle of Filth, you think of founder, vocalist, and lyricist Dani Filth -- the latest subject of Six Songs To Die With.


Dani Filth: Why? Well, as with all these tracks, it's fucking colossal! I always have joked that this would be the choice of song for my funeral, played whilst everybody wept (or laughed) whilst a crack team of Stormtroopers carried my casket out to my waiting Super Star Destroyer (parked just round the back of the church). There are a whole bunch of amazing soundtracks, undertaken by all manner of fantastic composers out there, but this particular song I think best encapsulates what I love about them. Bombast and nostalgia.

"Hallowed Be Thy Name"


Dani Filth: Classic Maiden with the added bonus of a story of a man awaiting execution being woven into the lyrics. I first heard this on Live After Death and was smitten with Maiden ever since. This song has everything that is great about Iron Maiden; melody, feeling, atmosphere, drama and an ending that keeps you headbanging away right up until its climax. In fact I liked it so much that CoF covered it way back in 1998, putting it on the special edition of Cruelty And The Beast, albeit slightly faster!


Dani Filth: Who doesn't like this song?! I remember my mother ordering this album on import for me from the States and getting it on Christmas day, 1987 along with Possessed's Beyond The Gates and Dark Angel Darkness Descends, and as much as I loved both those albums, they were completely floored by the juggernaut that is Reign In Blood. As soon as the scream hits at the beginning of this track, that was fucking it! I couldn't stop listening to it, it was just so totally dark. My Mum would then shout up the stairs for me to turn that rubbish off or something along those lines, which is quite ironic as it stands, as she's fancied Tom Araya ever since we toured with them on 'Tattoo The Planet,' 2001.


Dani Filth: Another absolute classic in the vein of King Diamond and Judas Priest, the subject matter being what first intrigued me about this song, the idea of a fairytale gone horribly wrong. The song itself is really labyrinthine, with lots of intricate musical twists and turns and heaps of dark atmosphere. This really is an under-appreciated classic from a line-up that only lasted for this album. I actually met the singer (Randy Rampage, obviously not his real name) when he was singing for a punk band years later, at a festival in Germany, and yes! I did bore his leather pants off by talking endlessly about this song. Am in the process of covering it with my local band here in Suffolk, England, who aptly go by the name of Devilment.


Dani Filth: This is one of the first metal records I ever owned and I think it's as valid today (and definitely as timeless) as it was when it was first ushered into this world. There is something truly magical about this album, whether it's the production that brings to mind ghosts and seances, or the eerie falsetto vocals of Mr. Diamond himself, or the superb musical dynamics of the band weaving frenetically throughout the song structures… this song embodies all of that and more. Truly Satanic, this is a relentless masterpiece embodies everything that makes metal great and possibly a cliche, but a fucking great one at that.

"The Eve of The War"


Dani Filth: Americans possibly aren't that familiar with this album, but I'm sure as dammit that they are with the Orson Welles radio broadcast that scared a whole nation, adapted from the HG Wells classic tale of Victorian England being invaded by Martians in towering tripod war machines. Well, let me enlighten you. Back in the Seventies this album was huge, particularly as it features none other than Richard Burton narrating over an apocalyptic soundscape that includes the voices of many famous Seventies stars, including Phil Lynott and Justin Haywood, to name but two.

The whole album tells out the story but it is this first song, The Eve Of The War that fleshes out the horror of the Martian invasion, set to enormous strings and dissonant guitars set over a moody rock backbeat. Incidentally, my love of this album is so well known that I was invited to try out for the part of Parson Nathaniel (previously played by Mr. Lynott), for the live stage show that has been touring arenas for the last ten years or so, whereupon I went to the creator's manor house and possibly bored him to death, riddling him with probing question after question. Subsequently the part eventually went to a famous opera star.

Last year the album was reinvented with the likes of Liam Neeson, Gary Barlow and Joss Stone taking on the much beloved character parts, and brought up to date with a smoother, more digital modern sound. Subsequently, I thought it shit.

this is actually a decent list of songs (especially the Darth Vader theme!)

keep in mind that posted above is a picture of Dani Filth at the age of 39. he is a fully grown adult male with a family. this is what he does for a living. while you're out working a job that supports the economy he is dressing up like a forest elf.

You had me at forest elf

The best list of songs I've seen from this series! I'm no COF fan at all, but he obviously has some great influences even if they didn't translate to awesome music of his own.

that Annihilator song is f*cking great. They were always an underrated band.

what a f*cking midget gay. if you own a cradle of filth album and you are older than 10 you should be drowned.

CoF's cover of "Hallowed be thy Name" is f*cking kickass

He is a f*cking clown, but that merciful fate song is pretty badass. I have never heard that.

"He is a f*cking clown, but that merciful fate song is pretty badass. I have never heard that." f*cks sake, I hope you're kidding

Well that forest elf is not a slave to the 9-5 wage and probably richer than all of us. Why wouldn't you keep that up? Plus he gets to dress up lots. Would love that.