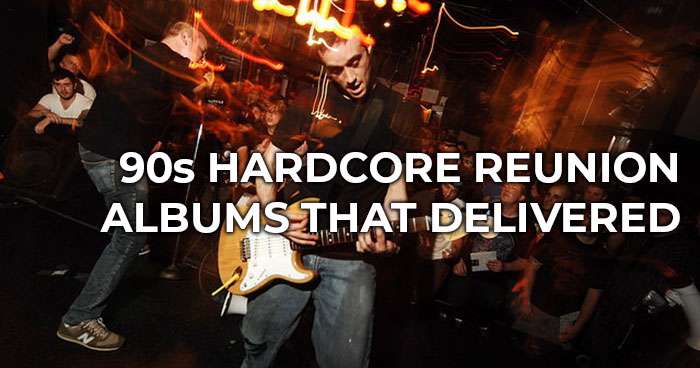 Return To The Pit
By Colin

We have officially reached the point in time (and age) when key 90s hardcore bands have decided to get back together, write some new tunes and hit the road again. In the past few years alone we have seen reunions from bands like Deadguy, Drowningman, Buried Alive and Eighteen Visions amongst others; not to mention the recently announced impending Botch shows. And with more and more newer, younger bands drawing from the well of the classic records these elder statesmen released, we got to thinking about some of the reunion records that really caught our attention over the years. Here are a few that lived up to expectations:

Even though it had been ten years since Coalesce’s previous record, 0:12 Revolution In Just Listening, Ox sounds like the natural progression the band would have followed if they never split. The odd time signatures, off balance riffs, shifting meters and discordant chords that made up the band’s influential core sound act as the foundation on which they explore new ideas, delving into blues and classic rock, even including soaring, catchy melodies. Guitarist Jes Steinger seemingly pulls these ideas out of the ether, twists them around, and perfectly inserts them into the band’s complex compositions. Vocalist Sean Ingram’s incomparable screams and intelligent lyrics lead the way, but a handful of delicately placed sung vocals are peppered in throughout, including the chain-gang-work-song inspired section of “In My Wake, For My Own.” It’s utter chaos, everything you want in a Coalesce record.

The Boston prog-metal-legends-turned-space-rockers reconvened in 2009 after a nearly four-year hiatus with their eccentric four-song Planets of Old EP, but their true return (for a brief period of time, at least) came two years later with their fifth full-length album, White Silence. Perhaps their strangest, most experimental record, White Silence took the band’s sound to new extremes in every possible direction. Songs like “Serpents” and “Vicious Circles” are some of the group’s heaviest, with bassist Caleb Scofield’s gritty bass tone and savage screams front and center. On the opposite end of the spectrum, the washed-out “Heartbreaks, Earthquakes” pushes into Piper-era Pink Floyd pyschedelia while the intro to “Reanimation” gets injected with guitarist/vocalist Stephen Brodsky’s singer/songwriter tendencies. There’s piano, synth and yes, even trash can percussion, but the high point of the album comes with “Sing My Loves,” an anthemic masterpiece that still stands today as one of Cave In’s best songs.

When one thinks of Cleveland hardcore, Integrity and Ringworm are typically the two behemoths that come to mind—and rightfully so—but In Cold Blood may be the unsung heroes of that region’s metallic hardcore sound. Credit that particularly to Aaron and Leon Melnick, key members of the classic Integrity lineup, but also to Blaze Tishko (who later played in Integrity), a staple of the Cleveland scene in his own right. Their 1998 record, Hell on Earth, was a combination of brutal mosh-inducing hardcore riffs and high-flying metal solos that stands up to any of the other Victory Records releases of the time. Unfortunately, the Melnick brothers didn’t make it on record for Legion of Angels, but their stamp is heard on the songs, some of which date back more than ten years before their release. Instead, Tishko recorded a majority of the material himself, even taking on vocal duties before assembling a new, complete lineup. With enough mid-paced chugging and fiery shredding for any Integrity or Ringworm fan, Legion of Angels is not only a worthy successor to In Cold Blood’s debut, it stands completely on its own in the realm of metallic hardcore.

Vision of Disorder’s last album in their original run, From Bliss To Devastation, was a polarizing shift from hardcore to swampy grunge rock, and Bloodsimple — the follow-up band featuring vocalist Tim Williams and guitarist Mike Kennedy — walked a fine line between metalcore and nu-metal, leaving fans wondering what a new VOD album might actually sound like. On The Curse Remain Cursed, the band returned to their hardcore roots, but developed a new, fresh take on their signature sound. Elements of their classic 90s albums are prevalent, as are some of the better qualities of Bloodsimple, but the album delves into a more modern, though creatively distinct take on metalcore. Vocalist Tim Williams’ sung vocals sound better than ever and there’s enough impressive double-bass work from Brendon Cohen to satisfy those “Formula For Failure” junkies. The Cursed Remain Cursed saw VOD matching melody and heaviness in a way that was sonically different than, but spiritually similar to the same way they redefined hardcore in the mid 90s.

By the time 108 split up in 1996, they were the torchbearers for what was being referred to as Krishnacore. Over the next decade their influence could be heard across the hardcore scene in bands like One King Down and American Nightmare. A New Beat From A Dead Heart saw mainstays Vic DiCara (Vraja Kishor), Rob Fish (Rasaraja Dasa) and Tim Cohen (Trivikrama Dasa) updating their sound rather than trying to emulate their past even as their influence continued to grow. With an outstanding production effort from Kurt Ballou, the band rips through thirteen tracks of intense, energetic hardcore that veers as much into noisy chaos as it does blazing metal riffs. The lyrics are still thought provoking and evocative, but come off more relatable, hinging less on the eastern thought and spiritual principles of their early material and more on the modern world’s troubles. A New Beat from a Dead Heart wasn’t just a welcome return for an influential band; it is arguably their best album to date.

There may never be a more appropriate title for a reunion record than Strife’s Witness A Rebirth. The record saw the seminal California hardcore band return to their roots a decade after the polarizing Angermeans. Witness A Rebirth sounds like it could have easily come out in the 90s when Strife were releasing their seminal albums One Truth and In This Defiance, straddling a line between the fervent energy of bands like Youth of Today and Gorilla Biscuits, and the berating heaviness of Unbroken or Judge. There’s a certain intangible quality to the classic Strife riffs — the galloping chugs; the catchy melodies — and the five-piece taps into it, bringing forth an onslaught of stage-dive worthy transitions and moshable breakdowns. Rick Rodney’s screams are as intense as ever and the tracks are loaded with plenty of gang shouts and sing-alongs, making all of these songs stage-ready. And with Igor Cavalera filling the drum spot, how could you go wrong?

One of the most ferocious and feral bands to come out of the 90s hardcore scene, Thoughts of Ionesco drew inspiration from groups like Black Flag, Deadguy and Dazzling Killmen, warping punk rock earnestness with a jazz-like experimentalism. Coming nearly two decades after their original ending, Skar Cymbals rivals anything else from TOI’s back catalogue in terms of sheer intensity. Guitarist/vocalist Sean Madigan Hoen’s primal screams and jagged riffs collide with bassist Nathan Miller’s peppery groove and drummer Derek Grant’s frantic, explosive rhythms to create a truly unique take on hardcore, metal and punk. The 10-inch’s three-song A-side is a master class on extreme music while its B-side is a bizarre, sometimes baffling, nearly thirteen-minute collage of recordings that showcases the diverse abilities of the musicians. This is one reunion that certainly wasn’t phoned in.

Florida’s Morning Again were a pivotal, though perhaps now overlooked band in the early development of what we now refer to as metalcore, and though it had been two decades since they had released their full-length, As Tradition Dies Slowly, the band sounded as fired up as ever on Survival Instinct. The EP’s songs are based heavily on riffs that sound like they were taken straight from Reign In Blood, but filtered through a metallic hardcore mindset. In fact, the explosive 33-second “Back Biter” is actually a straight-up thrash song. It’s pretty impressive, though, that with all the time that had passed, the band were able to simultaneously sound like themselves and to also push into newer, more extreme territories. Clocking in at just over ten minutes, Survival Instinct is way too short for how good it is, but luckily they have a new one on the way.

This guy wishes it was still the 90's so bad it's pathetic.

When Turmoil came back with the discography and those 3 new songs they kicked more ass than most.

What about For The Love Of… and their reunited one off album release with Mike Oleander (BBTS/Endeaver)?

BY COLIN We have officially reached the point in time (and age) when key 90s hardcore bands have decided to get back together, write some new tunes and hit the road again *posts albums from 2007, 2009, 2011*

I get paid more than $12 every article I write for lambgoat. I found out about this activity 3 months prior and subsequent to joining this I have earned effectively $48 from this without having good writing abilities. Copy underneath the site to check it.. whocares.com

anonymous 12 hours ago BY COLIN We have officially reached the point in time (and age) when key 90s hardcore bands have decided to get back together, write some new tunes and hit the road again *posts albums from 2007, 2009, 2011* clearly, someone doesn't understand the article. hilarious.

I delivered a massive turd this morning

^ it was a reunion of your left buttcheck meeting your right buttcheek when you were finished.

clearly, someone doesn't understand the article. hilarious. Maybe not but we all understand this place is a dud now

The one fan of FTLO posts above. Best part of that band was the singer before Mike BBTS was kicked out for f*cking all the other members girlfriends. True story. #bigdickenergy

The drummer on that 108 album gets no credit. Dude ruled. Also played on the first Nails recordings. Old buddy of mine.

I mean yeah I didn't read much past the first paragraph and was just coming to talk shit anyway.

I'd rather chant 16 rounds to His Divine Grace A.C. Bhaktivedanta Srila Prabhupada than to listen to these turd stroking bands. Haribol!!!

Sing my loves is one of the best songs by anyone ever.

I ate pasta at Rob Fish's house once with vegan tofu.

Turmoil and FTLO definitely delivered with their reunion releases.

^ as soon as the other three band members die.

Bands are ok, def better than 80s garbage like the big 4

I sucked a fart out of this girls butthole last night and it tasted better than all the vegan Krishna garbaage being served at the last 108 show i went to.

I have made $15000 in one month by working from home.When I lost my office job 5 months ago, I was very upset and an unsuccessful try for a job hunt I was found this online job.and now I am able to earn thousands from home. Everybody can do this job and earn more dollars online by follow this site..https://www.payto5.com