Between active rock and a hard place, Lambgoat goes to Vegas 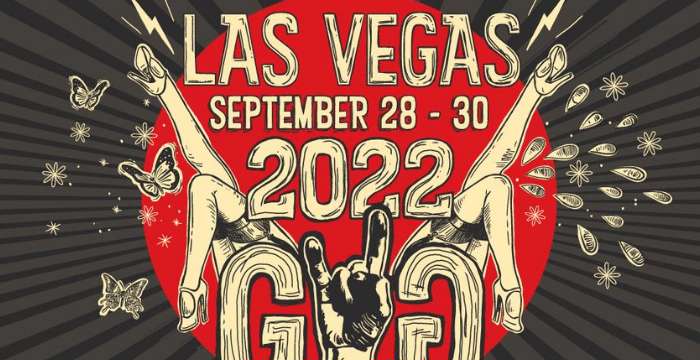 "You're invited to attend the G2 Active Rock Gathering in Las Vegas. You'll bowl with Sam Carter of Architects, watch an intimate Beartooth show on the strip, and attend a Godsmack arena show. Jacoby Shaddix, vocalist of Papa Roach will deliver the keynote address.

Food, travel, and accommodations are paid for, but you must agree to attend all events."

You can understand the hesitancy to respond to such an email if you have ever been sold a timeshare before, or simply have a discerning musical taste. A free trip to Vegas is enticing, but at what cost? If we agreed, we'd most certainly be offered a great deal on a decade-long package for some rock cruise or offered ownership of a Godsmack NFT.

Despite our hesitancy, the point of these showcase-type events isn't to sell you a timeshare, it's to raise visibility on lesser-known bands. Typically put on by an agency, publicist, or record label, these events will feature a well-known headliner as the draw, hoping you'll get an earful of the openers along the way. Usually, they are intended to catch the attention of radio personnel, program directors, etc., all who may help raise awareness and bring attention to the bands.

Active rock is an amorphous term that I'm not even going to try to explain here. There is a Wikipedia article if you care to dive in on the subject. All I'll say about it is that Lambgoat has never been, nor will it ever be an active rock news website. We cover what we cover, and that tends to be on the more extreme end of the spectrum.

However, the Venn diagram between Lamgoat and active rock overlaps ever so slightly. Architects and Beartooth are fair examples. Both bands have heavier roots and we continue to cover them, even as they march fervently towards a more radio-friendly sound that lands them squarely on active rock radio and beyond.

It's something we constantly wrestle with. Do we continue to cover bands on their march to radio stardom? Whether you use the pejorative "sellout" term or not, this has always been a part of any music scene, and always will be. Primo example Polyphia has been headed it's own way for a while, breaking free of their djent roots into something decidedly not metal. Guitarist Tim Hensen recently proclaimed to Guitar.com "It's not really cool to be in a metal band because they don't make any money." There's no money in metal, and we all know it.

Since we're all broke anyway, I guess a free trip to Vegas doesn't sound too bad after all.

Architects were initially slated to perform. However, with most of the band struggling with Visa entry into the U.S., vocalist Sam Carter was the lone Architect able to make the trip. Whisked away to Red Rock Lanes, we bowled, listened to the new Architects album (blegh), and had a short chat with Sam, who was excited to respond to a few of the world-famous Lambgoat comments.

To kick off the showcases Beartooth was scheduled with a number of bands at the Hard Rock Cafe on the Las Vegas Strip. We caught up with vocalist Caleb Shomo, exposing him to those world-famous comments, but first, we asked our intern to grill him with a few ridiculous questions.

Not surprisingly, as was the case with both Beartooth and Godsmack shows, the majority of the showcase bands landed squarely in butt-rock territory. Typically not the type of music we would cover, so we'll spare your ears. If you're curious, you can read the lineup below.

Finally, to save our sanity, we set ourselves a challenge to find the heaviest showcase band on offer. After giving them all a listen it was an easy pick with Alura, a Las Vegas-based hard rock/nu-metal outfit, who clearly stood out from the pack. So we caught up with them for an interview before we left.

Was it worth going? Sure, why not? It was a fun trip, we filmed a few videos, and got drunk with middle-of-no-where disc jockeys while playing death metal on the party bus. If nothing else, it was an experience. Since there's no money in metal, might as well get a few free drinks along the way.

Yeah I definitely want my last 5 minutes back

Rather watch snuff than read another article you ever write again

hang it up man

And get their organs stolen?

What pretentious drivel. Go bitch about your free trip elsewhere, twat. Take the pitchfork out of your stuck up ass. You are allowed to just have a good time without justification in an attempt to try and maintain your "metal card", even if you think it is "butt rock" - I bet you would have been all gung-ho if that genre had one less 'r and one more 'c'.

Jesus christ you are a moron and no one is going to want to come to Vegas to hang out and take selfies with you for your dumbass lambgoat shoot, even if it's for free.

Bro you mean I get to MEET the singer of Papa Roach AND have an intimate show with Godsmack? This is the coolest thing ever! I'm signing up right now.

lol @ all the preamble - you are so scared to say you like something lambgoat will make fun of you for. no one gives a f*ck about this

Making more than $25k just by doing simple work from home. I received $28376 last month. It's an easy and simple job to do and its earnings are much better than a regular office job and even a little child can do this and earn money. Everybody must try this job by just use the info on this page... :) AND GOOD LUCK.:) HERE====)>www.dailypay7.com

I have made $15000 in one month by working from home.When I lost my office job 5 months ago, I was very upset and an unsuccessful try for a job hunt. I found this online job.and now I am able to earn thousands from home. Everybody can do this job and earn more dollars online by follow this site..www.dailypay7.com