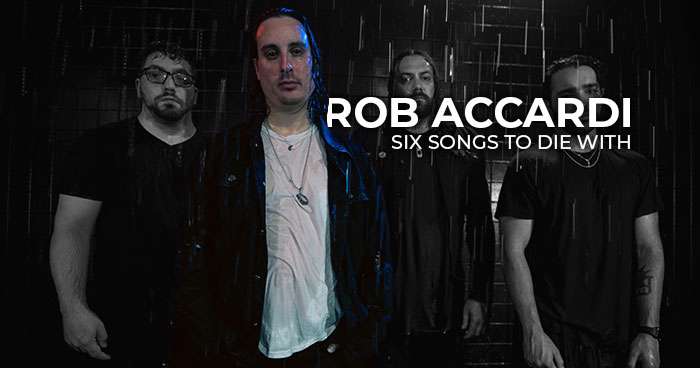 We have neither the budget nor the imagination of BBC Radio, so we've borrowed from their Desert Island Discs program to bring you our own scaled-down version, dubbed Six Songs To Die With. We ask a noteworthy musical guest to select the six songs they'd be stranded with on an obligatory desert island. Hypothetically, said guest will be dying on this island, so they've been advised to choose wisely. Selections appear in no particular order.

Rob Accardi: If you ask anyone, in any band, to pick only 6 songs to die with, you will be met with a similar comment about how impossible it is to narrow it down. But that's the truth.

My earlier memories bring me to riding in the car with my dad listening to Dark Side Of the Moon by Pink Floyd and Throwing Copper by LIVE. When I was old enough to get a cassette player, my first tape was Green Day's Dookie. For this article, I picked the songs that influenced me most growing up, and inspired me to play music for most of my life.

Rob Accardi: The first record I owned. I had a blue cassette tape and blasted it through terrible head phones. Cassette tapes were so cool. Dookie is such a great album and introduced me to punk and pop-punk music. “Burnout” is a great opening track and just reminds me of being a kid, no care in the world. Not growing up, just burning out.

Rob Accardi: This was one of the first songs I learned how to play on guitar, which is wild because it isn't simple chords. The melodies and the guitar solo on this track are excellent. Metallica was my introduction to metal music. Now, in my older age I prefer …And Justice For All and would probably take "One" with me. (That breakdown, c'mon!) But I choose “Nothing Else Matters” because it is impactful and stuck with me so long.

Rob Accardi: The Illusion Of Safety is one of my favorite albums of all time. It is still somewhere in a huge zipper cd pouch, right in the front. I used to listen to this album on family trips upstate every year. It's got the perfect mix of heavy music and singing parts. This band still resonates with me, and Artist In The Ambulance is another great record. I'd die with “Deadbolt” though, this introduced me to a lot of new bands.

This record came out at such an important time in my life. I was playing guitar in punk bands at the time when a friend asked if I could scream. I thought "Why not"? I'd give it a shot and my new band, A Perfect Dark, went on to play a show with The Black Dahlia Murder (HOLY SHIT). “Funeral Thirst” is such an awesome death metal track and opened up an entire genre of music for me. I learned how to scream by yelling over Trevor's vocals. Unhallowed is a rip the entire way through… and to follow up with Miasma! Great band, great name, great album art. GOAT.

Every Time I Die

Rob Accardi: RIP… for now? One can only hope. Without this band, I don't think there is a Dr. Acula. Keith is my biggest inspiration vocally. His range and passion behind his words are so impactful to me, they still get stuck in my head. Every album by this band is great and that's tough to say for a lot of artists. The guys in Dr. Acula and I met in community college before we all said "Fuck it" and went on tour. But we grew up in the Long Island music scene. Every Time I Die played with ZAO at The Downtown in 2003 and it was the first time I ever did a stage dive. “Ebolorama” reminds me of my band, my friends. "This is a rock n’ roll takeover".

Rob Accardi: A band and song that remind me of my family. “Losing My Religion” was the last song played at my wedding and my parents always tell me I used to rock out to this song when I didn't know what a riff even was. R.E.M. also helped shape a genre and inspired a lot of the alternative rock artists that I love. Now, they are definitely not my favorite band and I don't spin their albums regularly. But, family is the most important to me. So I'm taking these memories.

there's no gym for the face

*this is a Rock and Roll takeover, living each day as your last*

No one is going to sign up to win this on cd lol. Only losers still buy cds. Fitting for lambgoat and this band.

Squidward looking MF with 6 stale generic songs to die with

Thanks you for sharing.

Keith Buckley is stoked to be on this

Thanks for posting this.

Someone bully this band back into not existing