Section 8 may never have gotten their proper due in the history of metal and hardcore, but in their home area they are legendary.

If you lived within a certain radius of Albany, NY in the nineties and were listening to underground music, chances are high that you knew of Section 8; outside of that radius and you probably didn’t. So it went in the nineties—the hardcore scene still had an aspect of regionality to it that relegated some of its best bands to remain local heroes rather than the celebrated names they should have been. As unfortunate as that may be, it is also part of what gave that era its certain charm. 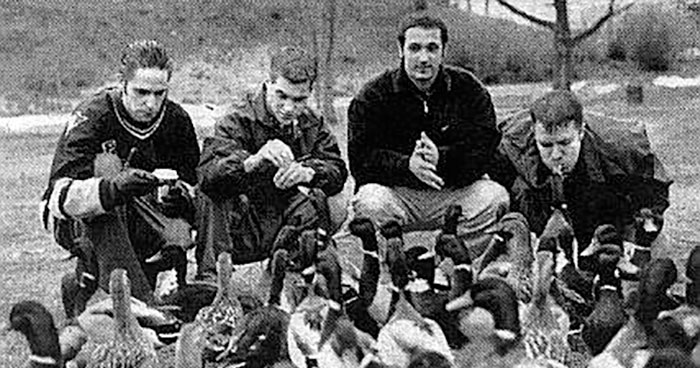 Section 8 came from suburban upstate New York—an area dominated by strip malls and assembly-line style housing developments—but gained notoriety within Albany’s booming hardcore scene. The band impressed audiences playing alongside the likes of fellow local legends One King Down and Withstand at the now legendary club QE2, and made waves with their debut LP, Pain Is Truth. On it, Section 8 showcased an original and intriguing blend of metal, hardcore and gothic rock led by vocalist Kasey Dorr’s low croon—a voice that resembled such iconic New York City singers as Peter Steele of Type O Negative and Mina Caputo of Life Of Agony. But it was with their second and final album, Nine Ways To Say I Love You, that the band expanded their style into a truly unique dynamic, one that would withstand the test of time.

As the record progresses, more straightforward songs like “Winter” and “Sky Is Falling” utilize heavy mosh grooves whereas “Torn” weaves its way around rhythmic shifts, as Section 8 move into more lurid territory. The albums brutal nature is broken up by moody instrumentals like the interlude track “Anesthetics” and the long, acoustic backed intro to “Torn.” In the middle of the six-minute-plus “Divinity Of Loneliness”—one of the albums most devastating tracks—the band drops back, providing a funereal bed for Dorr to lament the tragic loss of a loved one. Watkajtys’ trembling bass carries along the bridge as the rest of the band slowly joins, building up into a haunting refrain before crashing back into the song’s chaotic conclusion.

Throughout the record Dorr delivers starkly personal lyrics, often times invoking darkness with religious imagery. In “Torn” he writes “Wrists tied / Crucified / Drive the nails deeper this time,” and in between recitations of literary character Captain Ahab’s infamous “From hell’s heart I stab at thee,” in “God Complex,” the singer adds “I am the messiah and you are my sheep.” There’s an overall tone of grief and loss to his lyrics, which you can almost feel in his cathartic screams.

Nine Ways To Say I Love You closes out on two of the band’s most intriguing songs. “Shame Of Cain” is built upon a staggering riff which Janick lets ring out while the rhythm section carries on. The song also offers Sections 8’s most pleasant sounding break, occurring between bouts of furious riffing. Closing track “De-Omega” starts with clean guitar while Dorr sings in a low hush. Just as silence encroaches, he speaks in a near whisper right before all hell breaks loose. But just as the album ends, the band pulls back into a more melodic riff, the bittersweet aftermath of the albums onslaught.

Section 8 may never have gotten their proper due in the history of metal and hardcore, but in their home area they are legendary. Nine Ways To Say I Love You is a classic in its own right, an amalgamation of all the styles of music that made the nineties Albany scene a hot bed of creative bands. Fans of any type of heavy music would be wise to add this to their collection.

Alright Colin….you got this one right.

Good god this is dated as f*ck and does not hold up at all.

Did we just become best friends?

If you have a problem with this album it's because Casey probably slept with your girl. If you can still be with her after that then you should still be able to listen to this album.

They were offered a major label deal after a NYC label showcase but Kasey was hitting on the A&R's girlfriend so they pissed that chance away. These guys WOULD f*ck yo bitch. Alpha band without question.

Casey can't sleep with anyone's girl. The meth does things to a man that can't be undone.

I was fortunate enough to be able to attend one of their two reunion shows. Both sold out in no time. I will never forget that epic show! Local legends!

I attended a number of their shows at QE2 and Bogies. I did not attend the "legendary" reunion shows because I didn't want to give Casey more meth money.

Great band… the 90's where the best era of HardCore, especially in the 518. Flat Broke, War-Time Manner, Dying Breed, Cut Throat, Politics of Contraband, Burning Human, Download of Aggression, Stigmata, Execution Style and of course Section 8… I certainly missed a dozen bands I'm sure… the list of EPIC 518 bands in the 90's is virtually endless.

Only thing missing from the reunion was Kaseys teeth. Just because you made good music doesn't excuse you from being a shitty human.

9 Ways to Say Kasey is a White Supremacist.

Surprised more of the Kasey Dorr fan club hasn't come out to defend his shitty behavior his guitar player was already on Facebook crying about it. Anyone know if Kasey is still stalking underage girls?

I'm Kasey from Section 8 = AL Bundys 4 touchdowns in one game. Watched that dude have a meltdown one night because someone wasn't star struck when they saw him.

9 Ways to Say Kasey Dorr Is a Pedo

Turn around don't look at me I DONT HAVE NO TEETH!!

I AM NO ONE I HAVE NO TEETH

I smell the meth pipe burning

From hells heart I stab at teeth I STAB AT TEETH!!

Mother's lock up your teenage daughters Kasey Dorr is in town

Mothers lock up your medicine cabinet Kasey Dorr is in town. Fixed it

Kasey lives in a dumpster behind a Sonic. He'll perform for your next lemon party there if you give him a few tater tots.

Kasey adore, the man with 33 exposed gums, will be taking loads directly from your chodes tonight at EMPIRE LIVE! In Albany!!!! Don't miss the chance to be part of bono history! After party in the alley afterwards! $5 entry for the LEMON PARTY OF A LIFETIME!

Who gives a f*ck - give him some meth and let him be a shitty person if it means he will keep making music.

God that railing could be a blessing or a curse depending on how you used it. Capitol area had some of the most underrated bands of that time.

I know Drew Mike and Tim all solid dudes and I have heard the horror stories about having to deal with Kasey, still surprised they put up with it for as long as they did.

Colin is the biggest loser on the planet

Section H8 is better than this and they're terrible

Tim's a good dude. The two reunion shows were both amazing.

Kids are still mad, their moms took a load from from casey behind the QE2 back in the day.

Kids are still mad, their moms took a load from from casey behind the QE2 back in the day.

White Knighting for Kasey how romantic. Were you the dude who blew him behind the Q?

Kasey blew a dude to post that. Then he tossed his salad for a handful of Oycotin.

It's obvious there's one talentless Beta male who has an unhealthy obsession with Kasey. Posting 35 comments still doesn't change the fact he has more talent than you ever will, and has a hotter girl than you ever will.

It's obvious there's one talentless Beta male who has an unhealthy obsession with Kasey. Posting 35 comments still doesn't change the fact he has more talent than you ever will, and has a hotter girl than you ever will.

HA HA "Hot" is not the word I would use to describe Michele if you're into chicks with a pill problem then she's right up your alley.

^Post pics or else you're jealous, your blow-up doll -left you.

So Kasey has finally migrated from the WRGB Facebook page where he spends his days hurling racist comments with all the rest of the fat middle-aged stay-at-home moms to the Lamboat board. Kasey's "chick" is a the meth head who stands at the corner of Henry Johnson Blvd.