The southern California based band dressed in lab coats, black ties and protective eyewear for their live performances 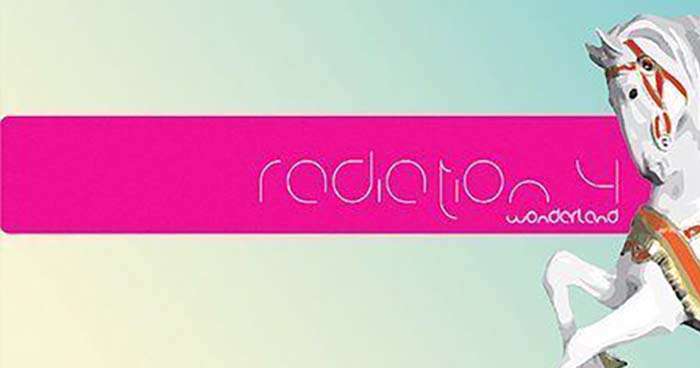 The artwork for Radiation 4’s sole full-length effort is a hallucinogenic reverie of flying elephants, giant mushrooms, and beaming pastel colors. Rocket ships blast into space next to a cloud-riding killer whale, all the while carousel horses gallop freely in a psychedelic meadow. It would be pretty fair to assume just from the visuals that you wouldn’t be getting a run-of-the-mill metal album. And it’s only too fitting that the musical trip contained within is enigmatically titled Wonderland.

Released in 2003 on Abacus Records—Century Media’s short-lived underground-oriented imprint—Radiation 4’s full-length was a major step up over their self-titled debut EP. The southern California-based band—which dressed in lab coats, black ties, and protective eyewear for their live performances—had shown an eclectic nature, but the EP didn’t quite capture their full abilities. But Wonderland, with its slick but loud production, encapsulated the band’s frenetic song structures and wacky, effect-laden psychedelia perfectly.

The landscape of heavy music in the early 2000s included a mountain of generic math-metal bands desperately imitating The Dillinger Escape Plan’s genre-defining full-length Calculating Infinity. But amongst the bevy of dull, masturbatory, and self-indulgent clones existed a few bands that embraced the more intricate stylings while running with their own identity. And while it is certainly clear who else was influencing Radiation 4—vocalist Chris Negrete unabashedly drew upon Mike Patton of Mr. Bungle fame—they created a unique enough album to call their sound their own.

While the four-piece might not have been as technically proficient as The Dillinger Escape Plan—or Mr. Bungle for that matter—they still managed to mix complex ideas and chaotic discordance into extremely approachable songs. On Wonderland, guitarist Jon Windham sways between angular jabs of dissonance, slithering leads, and melodic riffs throughout. Songs like “Tick. Tock. Tick.” and the title track are slabs of impressive guitar playing matched by the skillful drumming of Aaron Windham, with his precise rhythmic shifts and creative fills. While the band excelled at the sophistication of off-kilter time signatures, moments of playfulness heard in the carnival-like “When Animals Attack” or a nod to the theme from Super Mario Bros. in “Love Through Tapeworm Hooks,” showed Radiation 4 weren’t taking themselves too seriously.

Pushing the vibe of Wonderland into the extremely deranged, Negrete screams, talks, growls, chirps, and moans through effects that morph his voice into bouts of swirling noise. He even sings in an operatic, vibrato-heavy style that enhances the moments of spacey clean guitar breaks. The back-and-forth is perhaps best executed on “Magnolia Act I,” where the band jumps between pounding verses and oddly catchy mellow refrains. While its sequel, “Magnolia Act II,” flips between grinding blast beats and bouncing circus music, Wonderland hit its finest moment on the closing track, “The Prize.” On it, the group creates an atmospheric soundscape of delay-soaked guitars, rolling drums, and trippy synth-like vocal effects.

Radiation 4 unfortunately split shortly after Wonderland, before many people had an opportunity to indulge in the oddity they were. Luckily for us, they left behind an album that sounds as creative and refreshing today as it did when it was released nearly twenty years ago.
Tags: Radiation 4Least Hated

Oh cool! This douchebag is still doing these features even after the site got bought out.

lol at bolding Mike Patton and Mr Bungle like everyone doesn't already know who he and that band are.

This isn't very good at all. Maybe if I was still 16 and smug for liking underground music I might think this guy is cool for knowing some band I haven't heard of, even if they suck.

anonymous 3 hours ago Oh cool! This douchebag is still doing these features even after the site got bought out. Lol

I thought with new ownership garbage like this would stop

I, for one, like the album and the article. Seems like the writer is a cool dude too.

Love this review!!!!! Perfect. This was my FAVORITE album that year it came out!!! Forgotten classic I will never forget about. GREAT. BAND. Insane album

So weird seeing the stark contrast in headlines beginning immediately following the buy-out. Usually new ownership tries to be subtle but this isn't at all.

anonymous 3 days ago How much yall get paid to post shit like that? $13 an article and 3 hatebreed stickers. But the biggest payoff is the clout on the message board

This is probably the least shitty one so far, but every single one of these highlighted "least hated" albums have been absolute bullshit trash and whoever writes these has the worst taste in beta level hardcore and shit rock. My most hated is you for writing these embarrassing shit fests