'For a melodic alternative rock band, Far was mysteriously embraced by a much more aggressive audience' 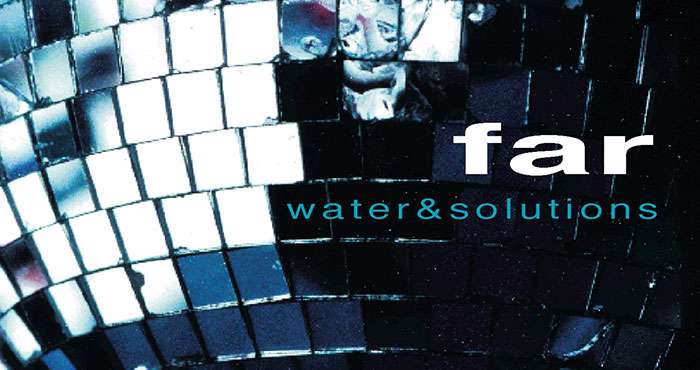 In Jonah Mantranga's book of memoirs, Alone Rewinding: 23 Years Of Fatherhood & Music, the former Far vocalist reflects upon his band's curious connection to the hardcore scene. He mentions the shows they played early on with the likes of Strife, Snapcase and Refused, and how iconic straight edge group 7 Seconds had even taken them out on their first tour. For a melodic alternative rock band, Far was mysteriously embraced by a much more aggressive audience. Guitarist Shaun Lopez had been in Inner Strength, whose Time For Reality 7-inch holds the distinct title of Victory Records catalog number 1, but Far's music was quite distant from anything related to hardcore.

Yet, the band retained their connection to the scene, with Matranga even appearing at the 2003 iteration of Hellfest in Syracuse, NY, playing solo immediately after a fiery set of mosh-inducing anthems by Terror. "Maybe it's because we play a little something for everyone," Lopez told Noisecreep in 2009 regarding their widely mixed audience. Whatever it was, Far's influence has been felt across the board, in genres like emo, alternative rock and even hardcore, mostly due to their 1998 almost-break-through major-label-backed album, Water & Solutions.

Coming from Sacramento and playing a style of loud guitar based music, Far was often grouped in with their friends and tour mates Deftones, but their style, especially on Water & Solutions, was a bit more cerebral and certainly less aggressive. The distorted Drop-D tuned, staccato guitar riff of opener "Bury White" might hint at nu-metal, but drummer Chris Robyn's walking tom beat and Mantranga's cool, meditative tone send it in a completely different direction. Throughout the album the band walks this fine line, somewhere between the rising alternative metal of the day and the bubbling underground emo of a band like Sunny Day Real Estate.

Producer Dave Sardy had a knack for guitar tone, helping create huge sounds for everyone from Helmet to Vision Of Disorder, and Water & Solutions was no exception. Louder tracks like "I Like It" and the fiery "The System" find the band locked into rollicking grooves where thick waves of distortion cut over the top of John Gutenberger's deep bass tone. In the lead single, "Mother Mary," Robyn pushes the band ahead on a driving beat, weaving in and out of loud and quiet passages. Even the emotional "Wear It So Well," with its thundering bass line, features a soaring guitar riff, one that pop-rock sensations Incubus have been nodding to ever since.

Rarely does Matranga yell, and when he does it's to accent the affection of the music, as in the title track where he strains just before a heavy, ascending bridge riff. In the band's mellower moments, songs like "Really Here" and "Another Way Out," the singer's voice is vulnerable, nearly cracking, but entirely in control. In "Nestle," he exposes a strained personal relationship, singing, "When I started this / I was thinking of my father / Now a holy ghost / Now should one become the other."

The album progresses curiously; rather than build to a massive conclusion, the songs become quieter, more poignant. "In 2 Again" brings string accompaniment to Lopez's melancholic chords, while "Man Overboard" builds upon a ringing piano tone. The final track, "Waiting For Sunday" is perhaps the band's most serene song, building to a wash of guitar and chorus vocals before dropping back out for its ethereal conclusion.

Far disintegrated not too long after the release of Water & Solutions. In his book Matranga places most of the blame on himself showing more interest in exploring a poppier batch of songs he was writing along with the uncertainties of his new life as a father. He also alludes to becoming disillusioned with the pigeonholing the band was subjected to tour wise, often being lumped into the nu-metal category. The final straw may have been when he turned down an offer to tour with Incubus and an up-and-coming System Of A Down, a long string of dates that could have been the final push that would bring them to a mass audience. It didn't happen and this record remained a hidden gem, one that fans of all styles could find something to connect to.

I hate the "writer" of this article and this album and every album he picks. What a boring and lame taste in music to have.

nice write up belmont. this albums a 10. tough to pick a favorite song, theyre all so good.

imagine not touring with Incubus and System of A Down at that point in time to prioritize working at Autozone.

album was/is timeless, every song was 10/10 and zero filler

Webbie when are you gonna post about Momentum pulling guns on kids you f*cking pussy?

Great pick, shout out to all the positive comments here. The other people are dumb lol