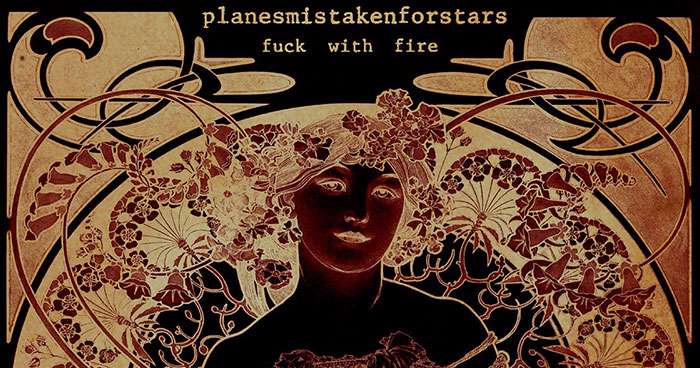 Defying the conventional trajectory of an indie band, Planes Mistaken For Stars were one of the few to actually get heavier, louder and more intense following their debut record. Released in 1998 on Deep Elm Records, a label known for their Emo Diaries compilations, Planes Mistaken For Stars was one part indie rock, one part punk and one part hardcore. And while a Sunny Day Real Estate fan could find plenty of the emo influence to identify with, the four-piece had enough chaotic guitar riffs and screamed vocal accompaniment to draw the attention of people seeking a more extreme sound, one that the band began to explore further on their follow up EP, Knife In The Marathon.

With the group's move from Peoria, IL to Denver, and the release of that EP, they began to find their identity – a more raucous, untethered approach. But it was when PMFS signed with the more punk-centric No Idea Records and laid down Fuck with Fire that they truly discovered their sound. The album's pure grit, raw emotion and intense energy heralded in the direction the group would take for years to follow.

Fuck with Fire is electric. The band explodes into the unrelenting first half of the record with "Leveless." Guitarist/vocalist Gared O'Donnell's dry, grainy singing voice – a painful sounding strain - melds into the blaring instrumentation, complementing the music rather than contrasting as it did on their debut. The guitars switch between melodic octave chords, driving riffs and punchy discordance, with guitarist Matt Bellinger adding touches of a deeper, more aggressive scream.

Planes Mistaken For Stars work in furious riffs to close out songs like "End Me In Richmond" and "Hollowpoint And Whiskey," drummer Mike Ricketts and bassist Jamie Drier frantically pounding away on mosh-worthy rhythms, helping to scape the intense nature of the music.

Planes finally take a brief break with the acoustic interlude title track, calling back to their mellower roots, but kick back into full form with "Rhythm Dies," one of the band's finest moments. The song features a build-up intro section that lasts half of its run-time before bursting into an onslaught of grating hardcore punk. The material benefits from the rough production, giving the album the feeling of a live setting, the group's energy leaping straight out of the speakers. After the crushing "I'll See You In Hell," Fuck with Fire closes on "Get Burned," a wash of noise and tribal rhythms - it's the meditative calm after the storm, giving the listener a chance to reflect on the damage caused.

Planes Mistaken For Stars followed up Fuck with Fire with Up In Them Guts and Mercy prior to taking a hiatus in 2007, and while both are certainly worthy listens, PMFS were never able to catch the pure intensity of their 2001 LP. With it they seemed to capture a moment in time – a moment right before hardcore, punk and emo split into completely separate scenes – and created an enduring amalgamation of them all.

God damn I hate that album. Didn't read the boring review of it.

With all due respect to the dead… after reading the first couple sentences of this review, I know I would hate it. F U Belmont

Oh wow, RIP. Its been ages since I listened to this album. Time to change that.

Also I agree with ham <3 I love reading these