Least hated: THOUGHTS OF IONESCO 'For Detroit, From Addiction'

It's been more than 20 years since Thoughts Of Ionesco released 'For Detroit, From Addiction'. It's worth revisiting. 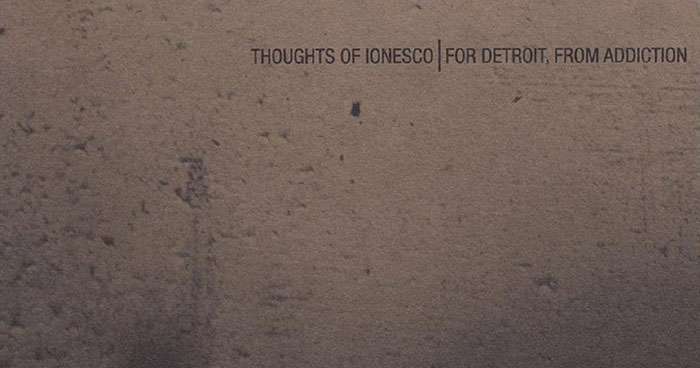 There's a sickliness that accompanies Thoughts Of Ionesco's third and final full-length album, For Detroit, From Addiction. Its cover art, consisting only of pale beige and several shades of grey, offers no visual cues to anything from the human world. There is no slick design or eye-catching logo - just a vast ashen emptiness. And just like the quote, "Thoughts Of Ionesco gave the bad taste in your mouth a sound," found in the liner notes describes, the music is as ugly as the record looks.

Throughout their brief three-year existence, Thoughts Of Ionesco released two LPs of raw, untethered chaos. On their 1996 debut, …and Then There Was Motion, the trio of guitarist/vocalist Sean Hoen, bassist Nathan Miller and drummer Brain Repa explored noisy hardcore rooted in more experimental bands like Deadguy and late era Black Flag. Hints of free jazz, sludge and noise rock were fleshed out further with the more metallic sounding follow up, A Skin Historic. That album featured the less maniacal, but equally impressive percussion of former Suicide Machines drummer Derek Grant (later of Alkaline Trio).

The agonizing sounds of their music carried over into their live shows, which were displays of emotional release and misanthropic destruction. The band was an exercise in agony since their inception. "We were truly people who were in pain at that time in our lives," Hoen told Alternative Press following the release of his 2014 memoir, Songs Only You Know. The book's story, which details a tumultuous time in his personal life, coincides with the existence of Thoughts Of Ionesco, giving further insight into the background and emotional depth of their songs.

For Detroit, From Addiction, recorded in late 1999 - just days before the band's final show - is an expansion of the identity they had developed over the previous few years. Reuniting with Repa on drums, Thoughts Of Ionesco were in prime form - extremely heavy and emotionally jarring. Songs like opener "Learning An Enemy" and its follow-up, "By The Way Of Herod," delve into the noisy math rock grooves of Dazzling Killmen, but beefed up a few degrees. Hoen's searing scream complements the rawness of his guitar tone while Repa pounds furiously away behind the kit. On "The Scar Is My Watermark," the band grinds through halting starts and stops before soaring out on a driving guitar lead, while closing track "For An End" veers into droning Neurosis-esque riffs and tribal percussion.

Thoughts Of Ionesco flip the tone with the acoustic numbers "November Vs. Michigan Avenue" - an instrumental that serves as an intro to the more melodic rocker "Waiting On Their War" – and "Song About Leaving." On the latter, Hoen stretches the limits of his vocal abilities, singing in a vulnerable croon that, while much quieter and slightly off-key, matches the raw authenticity of the band's fiery live sets.

As the album progresses, the material delves into more experimental territory with the addition of saxophonist Scott Bridges, a member of the final touring lineup of the band. On the instrumental "Black Harmonic," eddying guitars and jabs of dub post-production effects ebb and flow on a current of Miller's bass groove, but flashes of piano and saxophone move the song into more experimental jazz-like textures. The following track, "Regarding October," builds upon those concepts as Bridges accompanies the three-piece through the mid-section break. Between its serene intro, grating heaviness and far-out meanderings, "Regarding October" may be the quintessential Thoughts Of Ionesco song.

By the time For Detroit, From Addiction became available in 2001, the band had become the stuff of lore. They had faded into obscurity for all but those who had witnessed their display of chaos and rage. While they would reunite with Grant back on drums in 2017 for a worthy EP and a handful of live shows, the group still went largely unnoticed in the extreme music world. Maybe they were too far ahead of their time, maybe too far left of the scene, but for whatever reason, Thoughts Of Ionesco didn't go down in history the way they deserved. In Songs Only You Know, Hoen writes, "Decades later, when the connoisseurs unearthed our records, they'd hear our earnestness. Never did win – but what glorious losers." What glorious losers, indeed.

Not reading the review but the album rips

their drummer was Derek Grant who played for the Suicide Machines & is now playing the drums for Alkaline Trio.

^WRONG!!! this is an Entirely different drummer,kid.

Brian Repa? whenever Brian was Not behind the kit-Derek was.^let this tall glass of facts wash down your self indulgence.

Golden age of the genere.