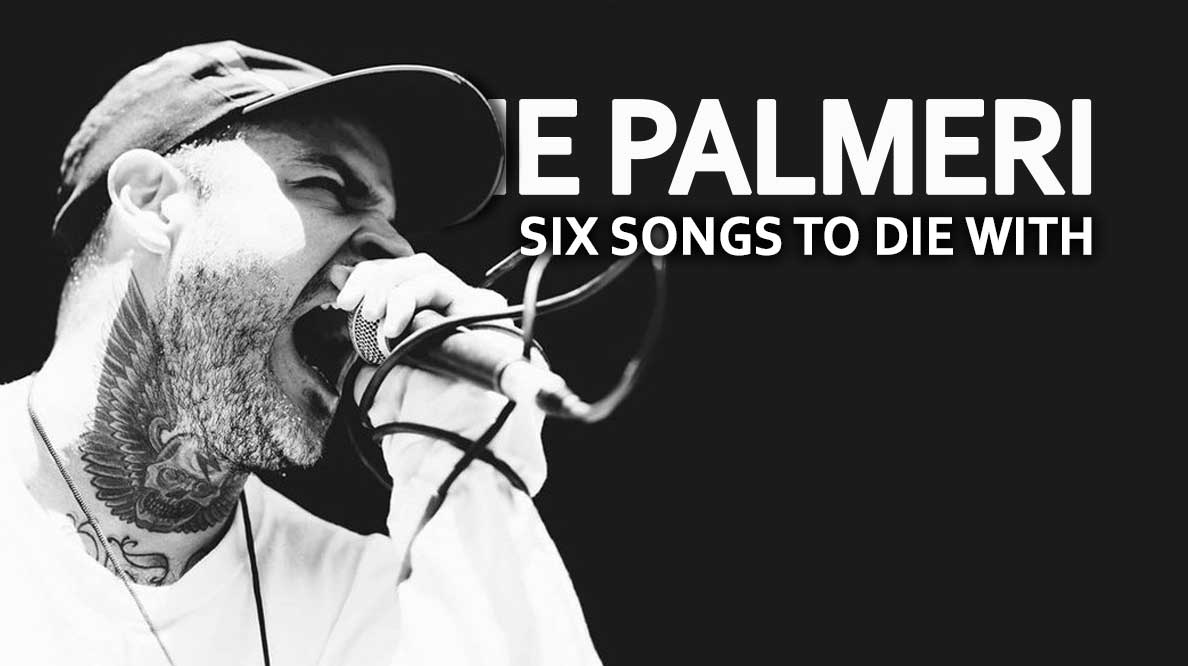 Few people in our little corner of the music world are as controversial as Emmure frontman and co-founder Frankie Palmeri. And given his regular presence on our website over the years, he seemed like the perfect person with whom to re-launch our 'Six Songs To Die With' feature series after a six-year absence. Enjoy!

Frankie Palmeri: When Lambgoat reached out to me, inquiring about adding my top 6 songs to die with, I wasn't sure how to approach the topic. There's a few hundred songs I wouldn't mind hearing before they pull the literal and proverbial plug on ole Frank of the infamously detested kingdom of Emmure, so it's really hard to just pick six songs, so I felt it more appropriate to use this theme to tell more of a story, share six songs that would catalogue the introduction of my love for music and what I would want my final exit track to be when I do the death waltz. So here are those six songs with some insight as to why these songs are so special to me.

Frankie Palmeri: Being the youngest sibling in my house during the 90's, I was exposed to many different genres of music, which means MTV was constantly being broadcasted into my middle class suburban home. Faith No More's music video for "Epic" is one of my earliest memories of being genuinely drawn to and excited by aggressive music. The music video left me in amazement, the song stayed pressed into my psyche, and I was forever a fan of Faith No More and the work of Mike Patton.

Frankie Palmeri: All the songs on this list will be from artists that made life changing impacts on me, and The Prodigy is definitely up there in that department. This song slaps way fucking harder than most. I never did get a chance to rock the liberty spikes (and yes it's too late, I am a bald fuck) but one of the first CDs I would ever end up owning would be Fat Of The Land. The passing of Keith Flint was a sharp loss for me, and I wish I would've gotten the chance to see one of the greatest artists of all time just once play live. That grief is only matched by the humans who aren't fans of The Prodigy, I mourn for those people the most. Rest in peace, Keith.

Frankie Palmeri: And now we are at number 3. Shit. This one was really hard because there are so many bands that should or could have taken my number three spot. Going to spew out a few of them just in case because it wouldn't be right to leave them out of the zeitgeist just because of the rules here. Some honorable mentions: Will Haven, Hatebreed, Candiria, NECK, Poison The Well, On Broken Wings...fuck, choosing six songs to die with is hard, but not as hard as this fucking song and album go. Bloodlust Revenge is a masterpiece to say the least, and the opening track is one of those things that is so electric, it's undeniable. Funny enough, One King Down was the first show I ever went to see as a kid—I must have been about 11 or 12—and One King Down is now subsequently the last show I have ever watched as a fan before the world went to shit because of this pandemic. Kind of serendipitous when you think about it.

Frankie Palmeri: Sorry to disappoint everyone by adding something so obnoxiously obvious to this list, but then again, fuck you. Talk about an extinction level of event to whatever path I might have been on in life. Even today, this song, especially this version of this song, is one of the coolest fucking things I have ever heard. Limp Bizkit crashing into my life was the ultimate paradigm shift, and none of you would have ever had the displeasure of hearing my voice if I had not been awake at 3 AM watching MTV to witness this one hit the airwaves in real time.

Frankie Palmeri: I wouldn't feel right making a list of songs to die to without the best death anthem ever written. His acoustic and rebel country is some of my favorite music ever, and if I had to pick one song for people to hear when I am dead it would have to be this one. It's hard to defend GG Allin the human being and I am not going to attempt to, but there's no denying that there's something special in the moments where he truly did bear his soul. Rest in peace, GG.

Frankie Palmeri: So here we are, we made it to number six. You got a taste of my childhood, my adolescence, the formative years and my inevitable death, so here's the song you play when you need to remember me, when you need to remember my laugh or that time you looked at me and knew I was your friend. I love Aphex Twin, I really think he is the greatest musician of our time, and I really feel bad for people who don't understand just how influential and amazing he is. This song is so beautiful, I would actually love for it to be the last thing I ever heard.

Way to butcher the spelling of Aisatsana, Webby.

Emmure should be on this. Im shocked I also like 3 of these songs

Someone hand this guy a dictionary.

Any Aphex Twin song is a good choice

Out of all the musicians you could have picked you picked this guy?

Limp Bizkit? He loses credibility with that selection. He tries to make it up with dropping GG Alin......

Good choices and how is anyone shocked that limp bizkit is on here? Do you know who emmure? I expected some golden age nu metal song

Somehow limp bizkit and gg allin are not surprising

Any of you that dog him for Limp Bizkit, but praise him for GG, you're what's wrong with America.