Jona Weinhofen (Bring Me The Horizon): Six Songs To Die With

Bring Me The Horizon and I Killed the Prom Queen guitarist Jona Weinhofen picks six songs to die with. 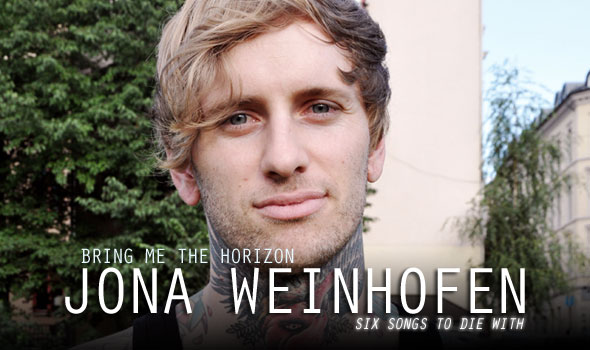 We have neither the budget nor the imagination of BBC Radio, so we've borrowed from their Desert Island Discs program to bring you our own scaled down version, dubbed Six Songs To Die With. Every week we ask a noteworthy musical guest to select the six songs they'd be stranded with on an obligatory desert island. Hypothetically, said guest will be dying on this island, so they've been advised to choose wisely. Selections appear in no particular order.

British band Bring Me The Horizon is one of the biggest metalcore bands on the planet. Jona Weinhofen (guitars, backing vocals) is one of their members. That alone makes him worthy of the Six Songs spotlight. But he's also done time in I Killed the Prom Queen and Bleeding Through, not to mention he's from Australia (we need some international input), so he's definitely somebody we wanted to feature.


Jona Weinhofen: One of Australia's most classic bands, this song speaks for itself. I first listened to INXS when I was a young child as it was one of my parents' favourite groups and they were thrashing it all the time. The song for me is synonymous with parties, BBQs, summer and dancing. Through my teenage years I didnt really listen to much music like this, I would only listen to it if it was heavy and brutal but in the past 5 years or so im getting a lot more in touch with my root music from my childhood and this song is at the top of the list.


Jona Weinhofen: I remember when I first heard this song back in 2000 and it blew my mind! I had been listening to a lot of hardcore and metal but nothing combined as much melody, technical guitar playing and brutal thrash as this record. It was also one of the first metal records I'd ever heard which was tastefully incorporating synths and keyboards. Those swedes just really know how to do it right.


Jona Weinhofen: ExC were one of the first hardcore bands I ever got into as a teenager. I've been straightedge ever since I knew what that lifestyle was (I've never drank, smoked, done drugs, etc. in my life) and vegan for 13 years. This band and song will always hold a special place in my heart. It reminds me of driving around with my other sxe mates in the small beach town we grew up in, and also covering it in my first highschool hardcore band. I still have the demo somewhere; we sucked.


Jona Weinhofen: I first discovered this band while I was recording a BMTH album in Gothenburg, Sweden. They're actually from Gotheburg and luckily they were playing a show while we were in town. They were incredible live and I've since become close friends with the guys in the band and gotten to see them a few more times. "On Wide Shoulders" has a really mellow post rock vibe and is the perfect music for chilling out, or listening to on the plane or tour bus. It puts me straight to sleep when I want it to as well!


Jona Weinhofen: Another classic brought about from my parents' influence. Just a great song, and an impeccable guitar solo!


Jona Weinhofen: Im a big fan of electronic music in general. I was listening to happy hardcore and rave/trance before I knew what a Sepultura or a Machine Head was (which is kind of strange). Anyway, not that this song is anything like happy hardcore, but it is just great. Lykke Li's voice is amazing. Im a huge fan of her original material as well.

No where near as long as puciato's, I feel let down like suicide season.

what a f*cking gay.

Australia has disowned this gay

you are shitty, you licking gay

He´s just not hardcore anymore after this

hey, you can't call Jona a gay just because he likes music we wouldn't listen to ourselves. He's doing something right, because the songs that are really "Gay" to you guys may influence him to do his best work on guitar. he's a f*cking amazing guitarist

What's wrong to like different genres? I like the whole core/metal genre, but I still listen to RnB, acoustic, rap etc. Actually, core/metal made me open up my eyes to other genres/music I didnt enjoy listening to before. There is nothing wrong with having a wide taste in music. inb4 hurr durr gay

All the hate is pretty immature, if you wanted to hear him be dishonest and list out some heavy bands just read a metal festival flyer. He's opened his ears to other music and he's proud to tell people what he enjoys, regardless if the reader enjoys it or not. Good on him

Music is purely based on opinions. If you don't like it then stfu and listen to what YOU like.

Don't care for his bands or his guitar-playing abilities, but props for Soilwork and Immanu El.

gays are butthurt over gay comments about some gay

Being straight edge just sounds so boring. More power to him though if that's his thing.

I would suck this dude's dck till the cows came home. Hot. gays be scared of themselves.

Neck tattoos are gay. Can't wait til BMTH breaks up and this gay can't get a job. The day he signs on for unemployment benefits, I will chuckle to myself

gay guitarist for gay band listens to gay music. who would have thought?

It's suicide season. Carry those six songs with you and kill yourself gay.

Hate for liking something more then metal, great job guys...

curtis was better anyway. old stuff had way more complexity and excitement. new stuff is one chord repetition. listen to the start of it never ends and tell me im wrong.

To be honest, Bring Me The Horizon, are as Amazing now as they used to be. Thank you. Sincery Adrian Lee Smitham