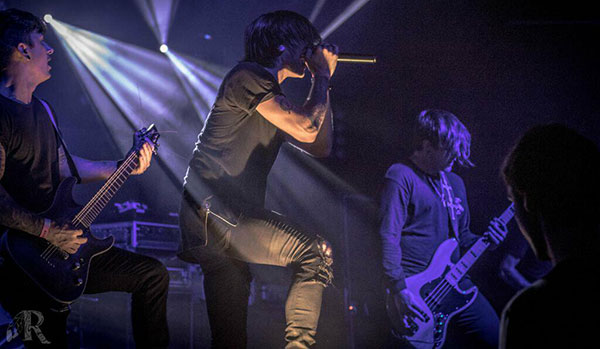 Little more than a year into their existence, Saving Vice is now preparing to release a new record. The New England band describes itself as post-metalcore, with a "sound reminiscent of early metalcore coupled with a more modern, electronic edge."

Today, the group has unveiled a single from their forthcoming EP, Colder Than Dark, which will be available on May 4. The new track is titled "Euthanasia" and features Rory Rodriguez of Dayseeker. You can have a listen below.

The band comments: "This song plain and simple is about suicide but not so much suicide itself but the collateral damage it causes to the people left behind. The song does have a rewal life subject but for the privacy of the parties involved, we won't mention them. When we asked Rory to feature on the track he mentioned the subject hit home with him so we let him write his part independently because we wanted the song to be real. Sometimes when you're in a dark place, it's easy to forget how many people will truly miss you when you're gone."

Check out the new song, and for more information on Saving Vice, you can find them on Facebook.

This made me throw up in my mouth a little bit. It's not very good.

Lol what is this garbage.

"band describes itself as post-metalcore, with a 'sound reminiscent of early metalcore" hahaha okay retards.

Yo this bangs hard!

These guys are the worst band I've ever heard. Who plays this high school shit in 2018? Oh ya, little gays.

Spencer from underoath here. This band sucks. what happened to lambgoat? This is music for pre teens.

These are the worst vocals I've heard on a professional recording. Sounds like a fart machine. This is one of those bands that spends more time buying ads than writing music. They most likely have a page listing "bands they have shared the stage with". Garbage.

Not bad not bad. Also not great but there's potential.

The people that hate on this stuff dont even play music. Go home and learn how to play an instrument before you hate on others hard work you f*ckin nerds.

The people on this song don't play music , either.

This made me so moist I had to swipe right on every tinder profile I saw so I could f*ck someone to this song. Shit rips for sure just like the girls pssy I just destroyed. Tell your mom, cat, and masseuse about this cuz it's f*cking wild

Stop making music. This sounds like someone farted into a mic oh and sweet ass fake drums. Whoever produced this should be fired

Those clean vocals are seriously awful, it's almost like he's misically illiterate.

Two tracks? Really? Lambgoat is repping bands that have two f*cking measly shits of a song out? Done with this site.

If you want good laugh, go watch their promo videos on YouTube. They're like a "post-metalcore" (haha whaaaaat??) boy band. Catering to high schoolers, I guess.

If you listen close enough, the lyrics are a comprehensive guide on how to bang teenage girls.

Just knowing people actually spent money to record this is embarrassing. Get the f*ck out of here with this bullshit and leave making music to musicians. This makes me want to do something that gets me on COPS.

I just saved a bunch of money on my car insurance by switching to bleach after listening to this.

Do us a favor and euthanize yourself

Hahahaha the f*cking band is fighting on their own failed promo!!! Shits goooooollllllddd. If you guys were real artists you'd let these 15 comments roll off your back, there's about a million others you're trying to reach that are gonna judge you ????????????

instead of hating on these guy's music, how about give them critique in how to better their music. They're just a group trying to follow their dreams so shut the f*ck up and try making music if you think you're the god of metal

Constructive comment: screams are fine, but that singer's clean vocals are painfully mediocre. Seriously needs some vocal coaching for pitch and overall timbre.

Call your local grocery stores everyone, local stores now sell STD kits. Thank those brave employees who came forward sharing they will not even disclose having a STD prior to f*cking you.

This is garbage. Nice attempt at ripping off thy art in the beginning ha!