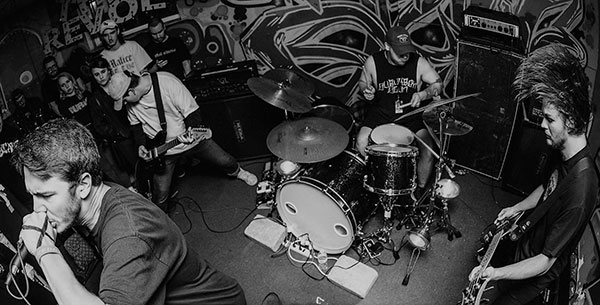 Later this spring Nashville, TN straight edge hardcore unit Orthodox will release their sophomore full-length. Anchored by a brutal dose of low-end, chunky hardcore with a thrash undercurrent, Orthodox has featured members of Kentucky notables Knocked Loose in its ranks at various times. Commenting on the band's influences, Adam Easterling (vocals, drums) had this to say:


"when Orthodox was formed I was still in high school. Our early material was really influenced by groups like the hardcore band, Foundation. However as time wore on, we realized we were much bigger metal heads than the hardcore/punk associated with straight edge. We just focused on writing the music we wanted to hear."

Recorded last fall, the new album is titled Sounds of Loss and will drop on May 26 through Unbeaten Records (Left Behind, Purgatory). Today we're pleased to premiere the album's first single, "I'm Scared Of You." Stream the song below, and keep up with Orthodox through Facebook. And if you'd like more mosh in your life, be sure to pre-order the new album here.

Can't make it as a HC band so they went the nu metal route which is even worse. Hang it up already.

f*ck you gays. Shit sucks. No one gives a f*ck if you share members with counterparts or knocked loose

I once thought that I lived más, but I didn't truly experience the más life until I listened to this song.

Hey guys Shane from down in it here, anybody know if rotting out is selling their van?

Lead singer is a fck boy.

Heard the same thing about the singer. Must be some next level Xf*ckboyX Also, this is some br00tal straight edge nü metal bro LOL