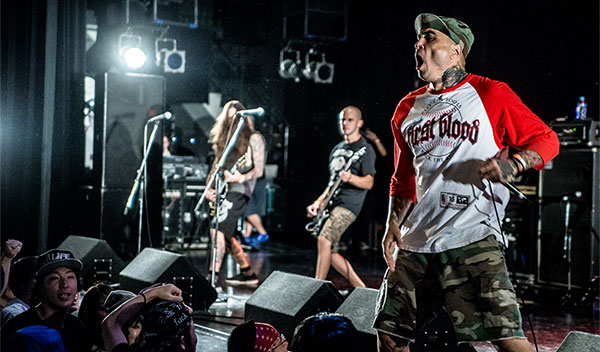 In case you haven't been paying attention, First Blood will release a new album this month. Notably, this will be the first new record from the metallic hardcore veterans in nearly seven years. And lucky for you, we're streaming the whole thing in advance of its release below.

Produced by sonic extraordinaire Will Putney and slated for a February 10 release through Pure Noise Records, the new album is titled Rules, and here's what frontman Carl Schwartz had to say about it:


"Rules are everywhere. Explicit rules. Unwritten rules. Unspoken rules. The rule of law. Some rules we accept. Others we hate or choose to ignore. Frequently, those who set the rules are found guilty of breaking those rules. Many have become victims of the rules they live by, either by conquest or consent. I hope that, after listening to this album and reading the lyrics, we can revisit and remind ourselves of the very essence of the underground music scene: Living our own lives by our own rules."

Alright, you know what to do. Have a listen, pre-order the album, and stay abreast of all things First Blood through Facebook.

I'm all in for hardcore edgy lyrics but a song consisting of "f*ck the rules" really?

f*ck these two douches!?? First blood do rule and I can't f*ckin wait for this album!

I agree with the last comment . First Blood are awesome, can't wait for there new stuff. The other two need to grow a set of balls. Simple

This shit is trash who the f*ck are they kidding

This goes hard. Don't like it? Move the f*ck on.

it's f*kin' ok! this band is unique

lot of internet tough guys on here,hardcore f*cking rules. come to the pit and talk that shit

This Album is straight heavy and hardcore as f*ck. Love it! Excited & happy to see these guys back together. Keep on pushing conscious lyrics to the scene. These kids need it. And to the person who made the first comment. You're stupid. "Edgy" really? Carl is speaking real shit. Something you'll never understand because you think its "edgy" lyrics lol

Yeah, agreed with ummm anonymous. If you think this is "edgy" you are a taco and you pay attention to way too much bullshit, first blood has always been nothing but real talk and they never waste time with gimmicks. First blood do f*ckin rule because they arent playing anyone's game. Simple.

This is sick, good dudes keeping it real.

I've listened to the album once, and will do so again. On the first listen it sounds as good if not better than previous FB albums. First Blood do RULE, and I can't wait to see you in London next week!

Yeah this is so sick.

That first song is just the into song.

This album has so much energy. Can tell the band poured their heart and soul into each song. Thank you for delivering a damn fine album! Hardcore is alive and well.

Quite clear from some of these comments that certain people didn't actually listen past the short intro to the record..which in case you hadn't noticed is called First Blood Rules. This record is really good straight up heavy hardcore with great lyrics as usual. You dumb shits can go and listen to some dungeons and dragons metal songs about satan or being dark moody and misunderstood.

"Are you not entertained?"