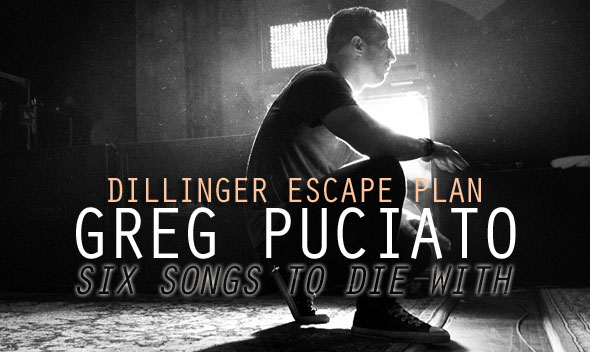 We have neither the budget nor the imagination of BBC Radio, so we've borrowed from their Desert Island Discs program to bring you our own scaled down version, dubbed Six Songs To Die With. Every week we ask a noteworthy musical guest to select the six songs they'd be stranded with on an obligatory desert island. Hypothetically, said guest will be dying on this island, so they've been advised to choose wisely. Selections appear in no particular order.

If you've been a Lambgoat regular for any number of years, you know who Greg Puciato is. After all, he was the subject of our greatest interview ever. If you don't know who Greg Puciato is, he's the muscle-bound frontman of Dillinger Escape Plan. And if you don't know who Dillinger Escape Plan is, I'm honestly surprised you're here. Anyway, Greg did a slightly different take on our Six Songs To Die With, as he picked songs that he'd actually choose to listen to while dying, haha. But it's cool, Greg's the boss around here.

I've tried to start this a handful of times over the past few weeks, and just haven't been able to approach this successfully in a typical way. Six songs to die with? As in I would die immediately after the final note of the sixth song? So I'm basically supposed to pick my six favorite songs of all time....and well...I just can't narrow things down to that number. My favorite songs change minute to minute, so I'm going to try to approach this less as a collection of favorite songs and more what my real thought process would be if I was just told that I'd be executed after my sixth selection. By Lambgoat.

Okay, shit. I've got six songs? This sucks. I wouldn't even choose to spend the last however many minutes of my life listening to music! I mean...maybe I'd have it on in the background while I tried to fuck and self medicate into oblivion, but if I'm forced to sit here and just listen to songs I guess I gotta do what I gotta do. Let's think. I should probably draw this out. I'll make the first song Sleep "Dopesmoker," because it's sixty three and a half minutes long, and buys me a lot of time to keep breathing. Besides the length, it'd be a good way to calm down and zone out a bit, providing I'm allowed to burn one while getting washed over by an hour of riffs. I'm not allowed to do that? Okay whatever. Cool, guys.

That was over an hour and it still went by too fast. Let's see....I guess maybe I should take this more seriously and listen to something from my youth that had a profound effect on me. I guess I kinda have to listen to Metallica "Blackened" for the trillionth time in my life. It's seven minutes long too, so besides being an audio time capsule of my youth from 9 to 13, it has the bonus of giving me a decent amount of time, all of which will be spent air drumming or air guitarring or air pointing....that thing Lars does where he stands up and points at the crowd and yells at them while completely ignoring any possible drumming that's supposed to be happening at the moment. Fuck, the bridge of this song is still so perfect. Part of me just wants to spend the rest of my time listening to the whole album of "...And Justice For All", which would make "The Shortest Straw" my final song....but I guess I should move on. Fuck I should have picked "...And Justice" the song instead of "Blackened" since it's the longer of the two songs...but the reverse "Blackened" intro and the perfect bridge was too much to resist. Damn it I really wanna keep playing this album now but alright alright let me move on.

I'm just going through Itunes at this point as "Blackened" ends trying to find something to keep me in a good mood, since the reality of impending forced death is starting to make me pretty scared and depressed. I can feel my brain starting to squirm. Fuck it. I'm going to pick whatever feels good at the moment. This Desire song "Under Your Spell" that was in the Drive soundtrack came into prominence at a happy time in my life...I'll play that. Yeah I know, what a faggot. Eat shit.

Okay, now that my body is getting flooded with endorphins as a natural response to my brain knowing it's about to die, I'm starting to feel oddly uplifted...giddy even...but in the way that you do when you're smiling and laughing hysterically while crying in panic at the same time. Okay I'll do this Telefon Tel Aviv song "The Birds". Another favorite "vibe" song. Makes me remember good stuff from the last year or so of my life. Man this is a bummer. I like being alive. Only two songs left 'til death by way of instant fatal AIDS or something...whatever method of execution Lambgoat chooses....a forced van flip perhaps. I can only imagine the screams and echoes of "DIE FAGGOT" that I'll be hearing from the message board faithful as I take my last breath.

Two more? Really? This sucks. Part of me thinks I should play more old songs from my youth that had profound effects. GNR "Welcome To The Jungle" maybe, Bad Brains "I Against I", My Bloody Valentine? Death? Soundgarden "Fourth Of July"? Nah.... I no longer wanna waste this time being nostalgic. Should I start blasting relentless grindcore so I can charge screaming mouthed first into the sickle of the reaper with adrenaline fully pinned? Or should I play something really depressing and slow? No no I honestly just want some silence to be able to hear my own thoughts and do some final reflecting. I'll play John Cage's "4'33" and do some thinking.

I've got it! Luckily it's 2012 and we've got smart phones because during that four and a half minutes of silence I rattled the corners of my brain for ideas on how to stay alive longer and Googled "longest song", and found out that there's a one thousand year long song currently in process that started in 1999! That means it doesn't end until 2999 so I've got as long as I fucking want! You lose, Lambgoat! You stole fizzy lifting drink and now you get nothing!! Suck it! I imagine the message board minions that were salivating for my end jumping up in outrage as they slam their laptops shut in disgust at the improbable last minute thwarting of my promised live-streamed demise.

listen to a portion of "Longplayer"

Oh wait. This thousand year long song sucks ass. It's all extended reverbed out pings and pongs, like some asshole's walking around in an echo chamber hitting tuning forks. Ten minutes in and I already feel my sanity slipping. This will surely make me want to kill myself within a few days, or I'll end up drooling away my days while committed to a mental institution. Damn it, I really should have just used "...And Justice For All" for every song on this list. Shit, I'd have had "Blackened", "Justice", "Harvester", "Shortest Straw", "Dyer's Eve"...right on, then I could have grabbed "The Thing That Should Not Be" off of "...Puppets" too. Fuck it. I don't wanna spend another second listening to this millennium length Enya on codeine bullshit that's playing now. We've all gotta die. I pull a fast one, dime the volume, and put on Discordance Axis "Castration Rite" as an illegal seventh song and before Lambgoat has a chance to kill me I grab the sharpest knife I have, floor the metaphorical pedal, and aggressively flip the van myself. Get aids, all of you.

Epilogue: After dying, Alex (Lambgoat guy) appeared to me in the netherworld and told me that it was just supposed to be six songs to die WITH, that I had to pick six songs to live with forever, and that it didn't mean that I'd be executed afterwards or anything. This sucks because not only am I already dead, but it turns out that hell, in fact, does NOT haev any respect.

This gay thinks he knows us n shit

that was pretty entertaining

someone else likes Telefon Tel Aviv? I feel less like a raging gay now.

This is awesome. Way to call out the Trolls Greg! You win.

I like the "Blackened" choice. Drive was a lousy movie, though.

The only gays are all you mommy wipes your ass "i'm so f*cking hardcore" douchenozzles. GP is one cool mf. His shits are cooler than you c-mdumpster gays. End of story. gays, the lot of you!

nice little tel aviv shout-out there. love his work with puscifer, lotta trolls but i dont mind the list. not everyone is all gloom and doom, listening to black metal in their moms bastuffts..

Jim f*cking Winters says, "As far as i'm concerned every day is the equivalent of John Cage's "4'33" "

^ hey, idiot. "haev" is spelled incorrectly on purpose, as it originally appeared on lambgoat years ago. Get with the program.

hey, do you remember when the dillinger escape plan got this nu-metal vocalist and have sucked ever since?

Cool choices and a very good read, couldn't help hearing it in his gaygy voice though.

great choices i especially love the last one dude!! =D

puciato is legit as f*ck

good choice on Desire, that whole soundtrack is great