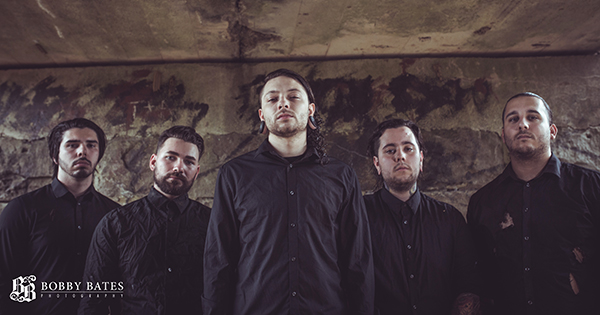 If you haven't been paying attention, Lorna Shore will be releasing their second full-length album next month. Formed in 2010 and hailing from New Jersey, the band continues to rapidly expand its fanbase via their relentless, yet nuanced brand of technical, blackened deathcore. Titled Flesh Coffin, the new record will hit streets on February 17 through Outerloop Records (pre-orders are available here).

In the meantime, today we're exclusively premiering a music video for new track, "FVNERAL MOON." Drummer Austin Archey had this to say about the song and video:


"FVNERAL MOON was the one song we were most excited about during the writing process. The song is by far the darkest, most melody driven song we have written yet. With the help from Director Joey Durango, we were able to capture a visual that perfectly portrays our vision."


"Sometimes people forget, that beyond our jobs, everything we own or our social standings, We're just people. Some of us damaged and simply trying to cover a wound so none can see weakness, and some of us just covered in scars just ashamed of their past wanting no one to see their mistakes. Everything has its way of surfacing in the end, and you are the master of your own fate. Whatever it may be, understand that everyone struggles, no one is perfect, and always acknowledge there is beauty in the struggle of life. Never give in to the darkness."

Check out the video below, and be sure to keep up with Lorna Shore through Facebook.

They are the f*cking best band live, if u think you've seen a metal show, go see them on their your\M/

I saw these guys with Miss May I a couple of weeks ago n they blew me away! Brutal as f*ck, just the way I like it!!!