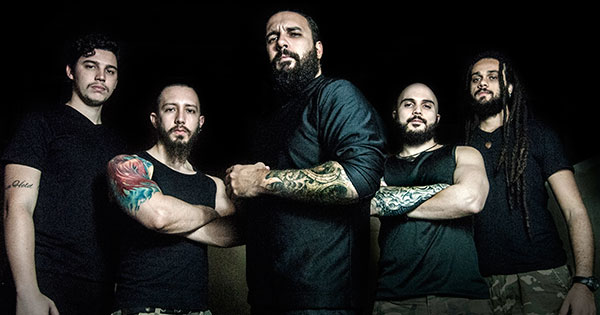 With their deft combination of metalcore and melodic death metal, Brazil's Reckoning Hour continue to raise their profile since the spring release of their latest, well-received album, Between Death and Courage (released through Famined Records and available on digital or physical formats). We actually premiered a video from the band in April, and due to their large regional following, the clip has received nearly 230,000 views on YouTube.

In the interim, Reckoning Hour toured a portion of South America with Children of Bodom, and performed at Hell In Rio, one of the largest metal festivals in Brazil. They now have their sights set on some U.S. touring in 2017.

Today, we're pleased to unveil the band's new music video for "Dead Man Walking," a track from the aforementioned album. Watch the video below, and be sure to check out Reckoning Hour on Facebook.

They are pretty nice!

It's unquestionably a lot different than the other single, but... I really enjoyed. Keep it up!

Ok, that song made me listen to the entire album, although this song is a lot different from the other songs, I like this kinda mixed up thingy in an album, It made me listen the whole thing and I didn't get tired.

They have a great chance indeed. Hopefully on the next album they get a big guy to solve the record quality. Don't get me wrong, music is good, production is, ok.