Virginia deathcore act Of Tyrants stream the first single from their debut LP. 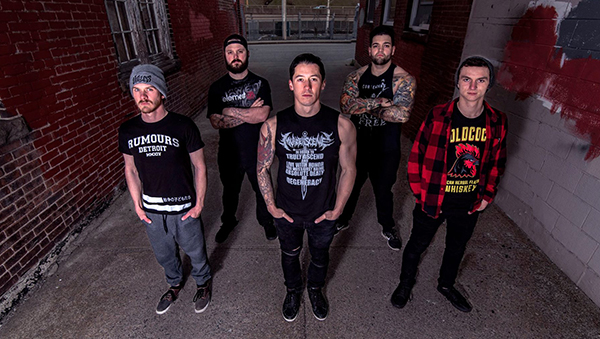 Next spring, Virginia Beach deathcore up-and-comers Of Tyrants will release their debut full-length, A Step Into Darkness, through Flagship Recordings. That's obviously months away, but fans don't have to wait any longer for some new music, because today we're premiering the first new song from the outing, a blistering track titled "Confessor."

Vocalist Chris Lindsay had this to say about the song and its lyrics:


"I was inspired to write the lyrics for 'Confessor' after reading a series of novels known as The Sword of Truth. The concepts and characters in the song are based off of events that take place throughout the books. Confessors have the power to control their victim's will with just one simple touch. The victim is committed to the Confessor's power instantly, and will do anything to serve and protect the Confessor who touched them. In addition, as part of the curse, they fall in love with the one who "confessed" them, making the bond (or curse) of servitude even stronger. In the series, this power is mostly used for good, and a Confessor is destined to help a man who becomes the 'Seeker of Truth' on his journey. I have always admired Confessors not only for the burden of power they are forced to carry, but for their beauty, resilience in and out of battle, and their high moral standards."

Have a listen to below, and if you like what you hear, you can purchase "Confessor" right now. Also be sure to have a look at Of Tyrants' upcoming tour dates (listed below). For more information, we encourage you to follow them on Facebook.

sleeves are not stoked.

seen these guys play quite a few times. pretty typical stuff. good for them.

what happened to Woe of Tyrants? anyway so this dude read some Vampire Diaries teen novels and thought oh shit great song idea

Fans of boring music are stoked.

This band blows so bad. Their drummer cannot play these songs, BFD or ProDrummer takes care of that for them. Steven Lally Jr. is the biggest tool on the planet. Their fan base is derived of navy bros and bar hags. This band is an embarrassment to the area

This sucks more than anything that has ever sucked before

People that are talking shit must not know these dudes at all. And yes they can play it live as well. So eat a dick!

This band sounds like 5 year old hot topic metal. Nothing original and I've heard these riffs before when they were popular...5 years ago. Super over produced music with zero organic substance to it at all.

^it definitely sounds like some people on here may know of these dudes. I bet you're in this garbage excuse for a band. Tell me, how many live laptop players do they have in the band? I'm sure they need a surplus to even match what this overproduced trash sounds like recorded. Even if they could play it live it would be horrific. sorry boys, yall made no technological advancements. Sounds like every other boring bro band

I guess that's the best part about posting anonymously lol. You can say what you want these dudes are so nice and supportive to everyone they play with. They stay for their whole shows, they're professional and easy to work with. Glad to see them do great things.

Right you are sir, as I am about 99% positive you are the guitar player cuz I'm pretty sure you just posted about how awesome it is that you guys stay for the whole show every show

good thing about them opening every show is you can wait till they are done playing to stop smoking!

Good news is you guys won't say this in public

You guys blow. Stop monitoring it and listen to your bros tell you how you've made it.

Man, all these kids talking garbage about yalls music must be the Know All Be all's. Why don't you let people write whatever music they want, and you act your age. This song is dope.

That was a piss-poor excuse for a slam. f*cking posers.

used to play in the local VA music scene when they started out. Cool dudes, but the music is cookie-cutter bullshit. Nothing special at all, just another heavy band-wagon band that wont make it out of VA.

"This band blows so bad. Their drummer cannot play these songs, BFD or ProDrummer takes care of that for them. Steven Lally Jr. is the biggest tool on the planet. Their fan base is derived of navy bros and bar hags. This band is an embarrassment to the area" so much truth in this statement

NO* WOE. NO CARE. DANG IT. Y'all still look dumb. Yer gunna pop an artery flexing that hard.

f*ck posting anonymously my name is Allan Shires. First off this is a way overproduced piece of garbage. I was expecting more but it seems like I am on a down spout of bad luck. Secondly stop trying to sound like just about every other cookie cutter unoriginal cookie monster bands. It does nothing for you. You guys are trying way too hard to get no where. You are just blending in more so you will no longer stand out. Congrats on this though don't expect to see me listening to this again.

first time hearing, just sounds like everything else that people are recording in their bedrooms these days. don't hate it, don't like it, just don't care.

Nobody gives a f*ck about your band or your burritos, gays.

Mediocre vocals at best, over done drum machine and the lyrics? HAHA give me a break. Did your vocalist not pass the 5th grade? These lyrics make no sense, it is like a retard wrote them. I could write better lyrics while OD on bath salts. Your band is bad and you should feel bad.

Goddamn, taking generic and cookie cutter to a level you'd expect them to lol

I don't get the "over produced" hate. I've seen these guys play a bunch of times and they are always tight. Yeah the music is not exactly groundbreaking but at at least these dudes are doing something and not sitting in their room giving nothing but nonconstructive critism.

I'm from the same area and my band has played a show with them. They are professional and work hard. That being said I can't stand this kind of music. I love a lot of heavy music, but this is not music, just obnoxious downtuned phoniness. hopefully some day their tastes shift and they choose to incorporate melody into their songs, because I think they would be able to succeed. Best of luck OT! I want to like you guys, I really do!

I'm from vb, I've played with These guys. I've noticed a lot of posts on here saying "they're easy to work with" this is total bullshit. Obviously whoever the f*ck keeps saying the same terms is someone in or associated with the band. This site has a huge outereach. You meant to tell me everyone who frequents this site is using the same key terms to describe the band? Total shit. It's obviously someone from the tyrants camps posting nonstop to help this post

Why such a huge gap till your release date? I don't get why you'd even release a Line 6 HD, Superior drummer cd. Come on guys, This is such a niche market. Being generic and using the same tools that everyone makes demos with to make your album is a sure fire way to be written off

i like how you cant tell what season it is... t shirt and a beanie? Fall? tank top? summer? home boy as on a beanie and a flannel. winter?

I saw them open up for The Black Dahlia Murder and Fallujah last April... if they still have the same drummer, the "can't play these songs live" comments are legit. Not that I could do any better... will check out the record next spring.