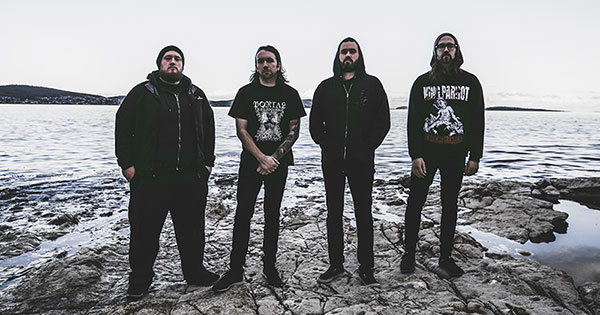 
Have you had a chance to check out Départe yet? No? Well, if you're looking for a one-word description, we've nothing to offer. The Australian band is difficult to categorize, as anguished strains of black metal, death metal, doom, and atmospheric post-metal intertwine to construct a twisted edifice of often bleak, though occasionally glorious extreme metal.

On October 14, the quartet will release a new, seven-track album titled Failure, Subside via Season of Mist (pre-orders are available now). Today, we're pleased to premiere a new track from the effort titled "Grief Echoes (Golden Scars)." Départe had this to say about the song:


"Our new track 'Grief Echoes (Golden Scars)' speaks of both regret and restoration - the suffocating guilt of wounds inflicted through one's own malice and inaction, counterpointed by the sweetness of renewal and rebirth. Things that once were dead are seeing new life, and old wounds are transformed into things of beauty. 'Grief Echoes (Golden Scars)' is sonically crushing, sinister, and hypnotic, trailing the lyrics throughout from overwhelming darkness, through contemplation, into cathartic emotional release."

Have a listen below, and keep up with Départe on Facebook.