Gearing up for the release of their final LP, hardcore act Expire debut a new song. 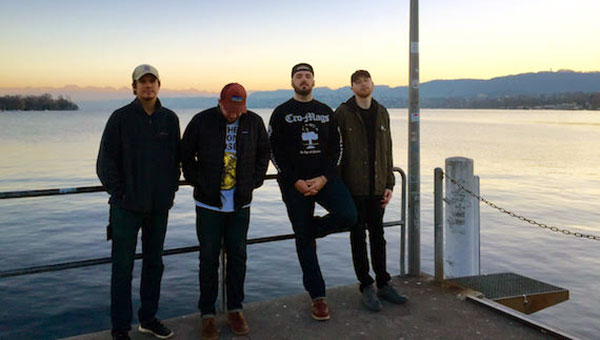 By now you've probably heard that after roughly seven years together Milwaukee, Wisconsin hardcore punk outfit Expire will soon be disbanding. Explaining the decision, Expire recently said, "To put it simply, we all decided that we would rather end it on our terms and when we want to, rather than fade off."

Fortunately, prior to disbanding the band will release a final full-length titled With Regret. Slated for a September 23 release through Bridge Nine Records (pre-orders are available here), the thirteen-track album was recorded by Andy Nelson (Weekend Nachos, Harm's Way) and promises to send Expire out with a bang.

Today we're pleased to present the band's new song "Regret" for the first time. Check it out below, and don't forget that Expire will be touring extensively all over the world during the next several months. You can keep abreast of their latest touring plans via Facebook.

when the t-ts keep piling up...get a shovel

they're clearly heavily influenced by their earlier terrible material

I don't REGRET listening to this song! I remember when these guys just started strumming the 4s and 6s! Bow down bishes!

I want my ass ate to this song

This song is good and all but have you ever tried garlic bread?

Zach dear paid me to say something nice about this song

sHane from DOWN INIT here, this band is sick man I love it some of their lyrics are about death and suicidr which is what all my lyrics are about. Lol pretty dark huh? Check us it @ bandcsmp.com/DOENINIT were bringin metalcore badk. also heard this band is breaking up? does anyone know if they're sellin they're van?

Bass player from cross me here. UFC rocks and so does this my song my bro.

"To put it simply, we all decided that we would rather end it on our terms and when we want to, rather than fade off." ^1. They finally realized they suck. 2. They faded off like 4 years ago. No one cares anymore.

Anyone saying they faded off 4 years ago is a gay

This band makes music for people who like to sexually assault women. This is date beat HC.

I heard Zach Dear's nipples wrote this one!

Bridge 9 has been completely irrelevant since maybe 2009?. Can't get into this song or this band.

looks at all the random hate comments, then realizes this is lambgoat and most of it's general populus is shit-posting troll lords who live with mommy and daddy still.

f*ck my ass you sage lovers

Who cares if it's relevant or everyone knows the band or whatever dudes, it's pissed and it bangs.

this song is cool. better than the first one they released from the album

This is some chillin' music. I could party to this.