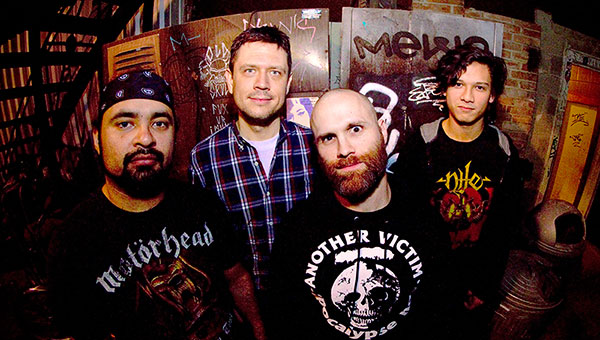 In three short weeks, Houston, Texas band Die Young will release a new album, their first with Good Fight Music. Originally formed in 2002, Die Young disbanded in 2009 before reforming in 2013. If their output has managed to elude you thus far, you've been missing out on an aural assault anchored by heaping helpings of hardcore and thrash metal. It's not all one-dimensional, testosterone infused brutality either; Die Young have a few tricks up their proverbial sleeve, even including occasional female vocals.

Titled No Illusions, the new album features sixteen tracks (one of which is a Nick Cave cover) and will be available on August 26. In the meantime, today we're streaming a new song from the effort called "Mortal/Eternal." Have a listen below and keep up with Die Young on Facebook.

All I want to know is: Where can I get this "Another Victim" shirt???