Gary, Indiana hardcore band No Victory stream a track from their upcoming album. 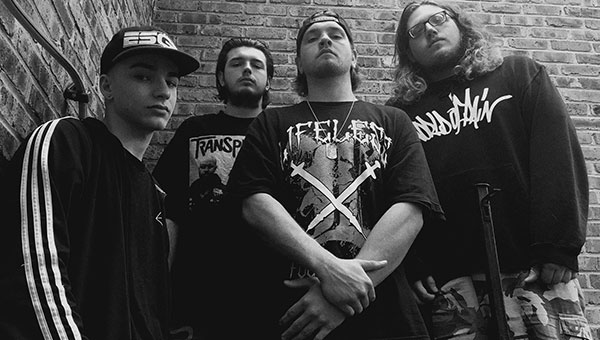 With two demos under their belt, Indiana hardcore band No Victory has now taken a significant step forward by signing with Unbeaten Records (Left Behind) for the release of their debut album. Produced by Isaac Hale of Knocked Loose, the new record is titled Time To Die and will be available on August 12.

Unless you've happened to catch the band on tour with Cross Me and Purgatory, among others, their incendiary gospel of raw metallic hardcore has probably escaped your attention. If you appreciate bands like Merauder, Xibalba, and All Out War, you should find something to enjoy amid the thunderous riffage and harsh vocals No Victory spews forth, so read on.

Today we're pleased to premiere a new track from the aforementioned album. Stream "Illusions Of Temptation" below, and if you're into it, pre-order Time To Die here and check out No Victory on Facebook.

Best band to come out of the Midwest in awhile

This shit is awesome

neck beards and kids that dont brush their teeth are stoked

This band covered shattered realm and can't even lift 300 pounds combined. Next.

Vocalist looks like something you'd catch in Pokemon Go

Kids who liked Job For A Cowboy up until 2016 are stoked.

Matt Anderson is so stoked

INDIANA goes hard as f*ck. Y'all got Blood In Blood Out, Penitentiary, Life After Death, and now this shit. LONG LIVE INHC.

Hey, just your standard Midwest hardcore kid here. Eating a bowl of mac n cheese in my parents office bidding on some All Out War shirts on eBay. This shit is awesome. Watch out if you're in the FYA pit this year. I'll f*ck you up! Wells anyways, Monster rules you f*cking cowards!

Kids who just found out about grimlock are stoked

Shit talkers come out to a show and get f*cked up. Oh wait, you WONT. INHC on top

kids in ghost inside cover bands 2 years ago are stoked

this is fr trash. not understanding the hype on this band or any of these other "midwest blood" bands.

Vocalist is literally the biggest trash piece of shit in the Midwest.

^yeah, he is a total internet girl

Zach Dear arranged for B9 but Cross Me sucks so bad they won't sign anymore of his bands.

Kids who listen to this band will actually report a comment for abuse.

Been to this bands house...actually from Gary. Not soft. Not for the weak

CD only release. Good label. Must be loaded.

Anyone talking shit on this band don't know what they're about. Indiana hardcore forever

Zach Dear here. Am I still the only guy who likes this band? Yeah? Ok. Me and the bass player from Cross Me are gonna eat Oreos. Milwaukee rules!!

People saying "you won't come to Indiana" LOL no shit.

Austin, you're a gay.

The singer of No Victory here. Just got back from f*cking some random girl and pretending to be a thug to read these comments. This is all really rude but really true and I'm getting my friend 21 Savage to come kill you all.

I got the clap from one of them

These comments are about as real and serious as this band.

Random exec from Unbeaten here. Despite what you've heard the Stigmata record is doing great. Almost got a dozen sold. Don't sleep on these No Victory jewel case CDs! Once we sell 100 in a year, I'll only have 900 left in my studio apartment.

It's crazy to think about how many people had to approve this snare sound.

Singer of no victory here. We had a line of sound designers and professionals specifically choose this direct snare sound. It took months to process the sound and blend it perfectly to sound like the 311 snare. I'm currently plowing a girl right now.

I enjoyed the music but whoever recorded this is the worst.

My girlfriend cheated on me

I was gay and this song turned me straight

The guy who wrote all these comments is stoked

Matt Anderson here: I'm gonna show my support for this by having someone take a pic of me and my girl flipping off the camera. Yeah, that's what's up!

The fat guitarist looks like Harry Potter after eating Ron and Hermione.

Not a single person in this band is from Gary

No victory certified gangsters from the hood. No one has a clue cuz they ain't from here

Favorite track any band has ever released

Get a life gays

No Victory over Fetal Alcohol Syndrome

Tommy Dice of 25 Ta Life here.Would be better without a drummer.

thought the track was skipping for the first 15 seconds

INHC on top....of other guys who listen to hardcore.

Michael Jackson here...i grew up next door to these wiggers...pull your pants up

Hardest bands come from nothing and this is one of them

Will be personally offended if this band doesn't play TIHC

Al these people sayin f*ckin mwb bands this isn't even a mwb band! This is an Inhc band