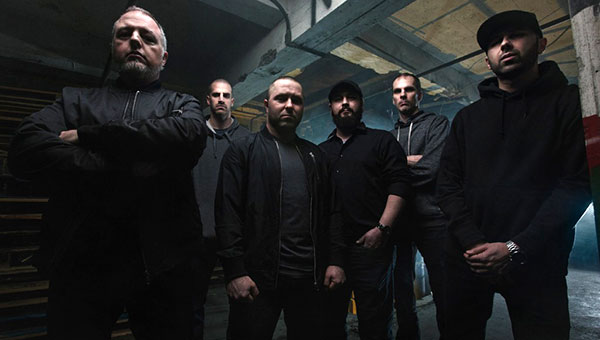 Next month, Montreal's Despised Icon will make their triumphant return to music store shelves with their first studio offering since 2009. Regardless of the band's affinity, or lack thereof, for the deathcore label, there's no disputing that Despised Icon is among the genre's pioneers and founding fathers. Whatever you want to call their brand of death metal, Despised Icon's music earned them a sizeable fanbase amongst consumers of extreme metal. And though the group took an extended break, their fans appear as anxious as ever for some new music. On July 22, the throng will be fed with Beast, a ten-track effort roundly expected to live up to its name.

With the new record's release on the horizon, we wanted to catch up with Despised Icon guitarist and co-founder Eric Jarrin. Not only that, but we're premiering a new song and music video (directed by Matt Charland) from the band in the form of a track called "The Aftermath." Read the interview and check out the video below. If you haven't already done so, you should probably pre-order Beast as well.


It's been seven years since you've put out a record. Why now?

Eric Jarrin: What happened was we all went to see our old bass player Max with his current band The Black Dahlia Murder in 2014 and it was the first time that we all hung out together in years. It had been a good four years then next thing you know, we're hanging out and remembering all the stuff we did and we needed to take a step back. Then we got to a point when we were all ready to invest in this project again so we were like 'let's play some reunion shows' and see what happens. And the truth is that I was astonished to see not only the old school die hard fans there to support us, but a lot of fresh faces at those shows. A lot of new people had heard of us or started listening to our music when we broke up, so to see that many people show up and still care was very motivating for us. People kept requesting new music, even though we weren't touring much. That was the most common comment from fans. When we did the reunion shows we said 'let's give it a shot, let's try and write new songs' just to see how it goes. Next thing you know, we have a full length coming out!

Eric: In 2010 we were burnt-out: in a state of over-touring, being productive and efficient putting out a record every year and a half with constantly being on the road… we were at the crossroads. All of us were pushing 30, all of us were in serious relationships and a the majority of us had kids on the way and had new career opportunities, we pretty much wanted to try out different things.

Now the kids are grown up, everyone has some time to invest in the band and we do everything on our own terms, which means we enjoy ourselves like in the good old days and we don't feel pressured by the business side of things.

From your perspective, what's different about the metal scene in general?

Eric: From what I see, it just kept evolving like it always did. New generations of bands coming out with different blends of metal. Honestly, I didn't really keep up with the scene so much, I pretty much stuck to my roots and did my thing.

Prior to your break-up, you had released three albums with Century Media Records. For the release of 'Beast', you signed a deal with Nuclear Blast. How did the deal come about?

Eric: We were originally planning a self-released 5 song EP but it only took us a couple of months and we had a proper full length going, and because doing everything DIY is a lot of work and takes time, we just discussed who would be our number one label to get everything out with, and we all decided that Nuclear Blast would be the best, and luckily for us they loved the finished product and just wanted to work with us!

The new album features mixing from Andy Sneap, with whom you last worked in 2007 for your 'The Ills of Modern Man' record. Can one infer that you preferred the sound of that album to its successor, 'Day of Mourning'?

Eric: Andy has always been an all-time favorite producer for Despised Icon. He was our first choice for mixing 'Beast'. 'Day of Mourning' was produced at a time where all metal productions were over-produced, with most drums sound replaced to get the maximum impact, along with perfect note-to-note guitar licks and insanely loud masterings. In order to be in the game at that time, we had to put out an album that was produced that way. But for us, the production on 'The Ills of Modern man' has stood the test of time. Meaning it sounds more natural and not too processed. We wanted to come back with an album that sounded organic, like you hear the actual band, with real drums and straight to your face one-layer vocals! What you hear is what you get when you see the band perform.

And the "pig squeals" are back?

Eric: Yes, we have brought back the "pig squeals"!

Though you guys are considered deathcore pioneers, you outright rejected the label during an interview with MTV News in 2007. Fast forward ten years... how do you feel about the term now? Why do some bands embrace the label, while others do everything in their power to avoid the it?

Eric: I can't speak for any other band but we've always been cool with it. In the end, it's just metal to us. And that's exactly what we've said back then. When we started out 15 years ago, our goal was to come up with brutal music by combining what we liked the most in metal: blast beats, slam riffs and breakdowns. We've been doing that way before it became a trend or a genre and we'll keep on doing it, because it's who we are!

Is it safe to say that save for sporadic shows and mini-tours, Despised Icon will not be returning to the road for consistent touring?

Eric: The band will never be touring full time again. Most of us have families and careers back home, and it's just a matter of being able to provide for them. But we're set to play everywhere as much as possible, it might just take more time for us to visit some countries and cities around the world. So if you ever see a Despised Icon show advertised nearby, you'd better show up, otherwise it might take a while before we come back!

How does Despised Icon's resurfacing affect Alex's other band, Obey The Brave?

Eric: I think they know where Alex comes from and they respect that. And we have a lot of respect for them as well. We work in a way where we understand Alex has to commit to that project as well and we manage our stuff accordingly. And I can tell you that the guys have always been very supportive of us since we started to play shows in 2014. They even lended us their van and backline for some of the gigs we did back then!

Has there been any discussion regarding future releases, or is this a once-and-done type thing?

Eric: The band is back for good. As we mentioned earlier, we'll do things on our own terms but we still have a lot in us. So we definitely plan on releasing some more music in the future!

My undercarriage is gooey.

this fire track. pig squeals are def back. ree-ree for for. hopefully they use that dope beast print on a wall flag. package that with some mosh shorts and tough shades and eureeka! 'Deathcore' Jon

This band is a stupid