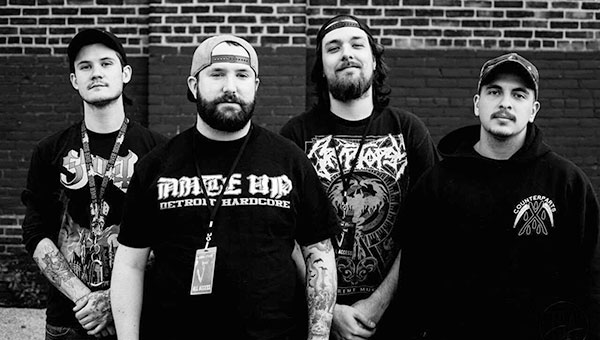 Turncoat has been a band for less than two years, but they've already started to make a name for themselves in hardcore circles. During their first year of existence, the group toured a significant portion of the United States and also landed a deal with Floridian record label Eulogy Recordings. On June 10, Turncoat will release their self-titled EP through Eulogy. As such, today we're premiering a video for a song from the outing titled "The Friends You Need."

Guitarist Keith Keister comments: "This is our very first music video for the third single from our upcoming EP. We had so much fun making this video with our friends. It's fun, it's energetic and it shows a lighter side of the Michigan music scene while all the while having a serious message behind it. Working with the mighty Nick Frollo was a blast and such an easy process. If you're a fan of hardcore without all the bullshit jock mentality, 'The Friends You Need' is right up your alley."

Check out the video below, and keep up with Turncoat on Facebook.

More naked people than thwt Varials video. I can dig

I can fux wid it

This is awful and the vocals are terrible.

this isnt even half assed. this is the worst thing i have seen in many many months. shame on myself. i should be running errands and i just watched that video instead. are the musicians into the music they write? it looked like they were trying to have energy but instead gave up. these folks have given up. the "bit nipply" joke was the cherry on top. f*ck this shit

So whats your band doing? Oh, you dont have a band? Then f*ck off with your negativity.

I can't get all the negative comments? This is really good..lambgoat trolls never die!

Absolutely fantastic. I loved it. Keep up the great work, guys.

On behalf of michigan hardcore, I formally apologize for this....

The vocalist and guitarist cheat on their gfs consistently with the fat ugly chick that does merch for them!

Like it or not it has 4000 views on this post. Cheers fellas! Bring on the shit talk please.

Shit makes me wanna get on a skateboard or something

I can vibe with this. Vocals are kinda weird at first so it took me a few listens

This band is so unimportant that people can't even bother to talk shit. LOLing at all the positive comments from obvious friends and family members of the band.

Came across this shit on my coworkers page. This shit is tight as f*ck.