Pimps, Merch Rates and No Brainers

Entertainment industry professional Jeff Menig wonders why most bands aren't being more proactive when it comes to their merch rates. 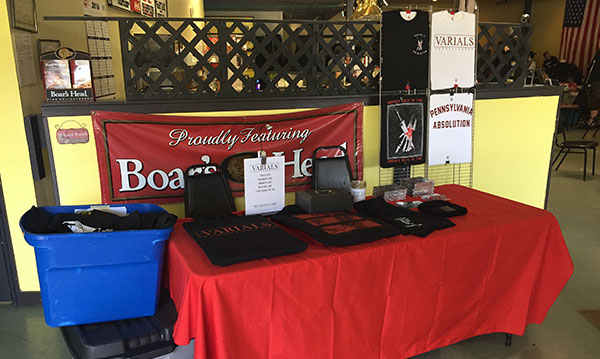 You just saw your favorite band, in a packed and sweaty room, or perhaps a more intimate (and possibly awkward) setting. After the show, you wait to meet the band for a moment, grab a t-shirt and then head to a late night diner, where you and your friends will relive the evening's highlights like you're cohosting SportsCenter.

What's happening back at the venue is something that's increasingly the subject of debate in recent years: the band is handing the promoter a percentage of merch sales. In an article shared with me by a friend who works as a touring merchandise manager, the band Behemoth went on the offensive against the entire practice, which inspired me to write this article.

See, back at the venue, merchandise is being counted. T-shirts, hoodies, hats, and whatever else the band has for sale. In a process literally called "counting out," merch managers (working for the venue and band, respectively) figure out how much the band sold by comparing the number of items leftover against the quantities the band had when they arrived. Yep, they "counted in" before you got there, too.

The venue gets a cut of the band's merchandise money. The percentage is generally around fifteen, depending on what was negotiated before the show was confirmed. As I understand it, the venue figures they are giving retail space for the band to set up, in essence, a pop-up store, and the percentage covers "rent" for that space.

I've been on both sides of this arrangement, as the promoter collecting the percentage, and as a manager trying to find ways around it for my clients (yes, those conversations take place). As such, I can play Devil's advocate for either side.

To most bands, increasingly dependent on touring revenue, they see merch rates as money coming right out of their pockets. Bands, why are booking agents negotiating your merch rates? Why allow someone who has no vested interest negotiate deals concerning the fastest growing part of your overall business? Everyone knows that agents get paid a percentage of performance fees (most of which come in the form of guaranteed money, regardless of turnout). Merch sales have no bearing on how well agents are doing their job yet agents are given the rights to negotiate on your behalf?

Until the music industry's broken system is fixed, merch rates will be a reality, so you might as well have someone who is affected by them handle them: a manager. And maybe they can figure out creative ways of negotiating down the percentage taken.

With my thinking cap on, to start, why not trade extra personalized and geo-targeted promotion for specific shows in exchange for reducing the merch rate? Or offer VIP upgrades and autographed merchandise giveaways? Offering these things is so easy to do for an artist and goes a long way with promoters.

Give the show more personalized promotion and get a reduced merch rate, which will in theory draw bigger numbers to the show and therefore result in stronger merch numbers with more opportunities to hit back-end bonuses.

That makes them no-brainers. No-brainers are great.

Jeff Menig has worked in entertainment since 1999 and was the mastermind behind The Power Kingdom - which launched the musical careers of Sworn In, Yuth Forever, Darke Complex, and more. He has created or contributed to numerous other ventures including but not limited to The Bamboozle Festival, Skate & Surf Festival, Six Flags FestEVIL, and A Very GK! Holiday Festival.

The entire time I was reading this I kept thinking to myself, "who the f*** is this douche?" Then I read the words "launched the careers of Sworn In and Yuth Forever" and it all made sense.

Holy shit this is the lamest shit I"ve ever read. f*ck you.

Finally, an ineffective essay answering a question no one is asking.

any band playing a room that takes a cut of merch can afford said merch cut.

With my thinking cap on, to start, why not trade extra personalized and geo-targeted promotion for specific shows in exchange for reducing the merch rate? So you'll get all the band's friends from a shithole in Kansas to show up and ask for guestlist spots at the local VFW? Yeah, that'll work...

If I was in a band, my guarantee would be reflective of this extortion.

"says the guy who was paying for an apartment with the merch commission from the careers he launched" LOL exactly. Managers and agents shouldn't take a cut either. This is charity right

It's a trickle down revenue enhancement from festival and large theatres needing to take the sales tax. This article is light on information. The opening bands get screwed by price matching and 15%-$20% of their merch is a lot when you don't sell 8,000 a night.

Tell everyone your merch is for sale at the table set up on the public sidewalk right outside the venue. Problem solved. Dumbasses.

Too bad every band Jeff "managed" dropped him bc he's a sloppy drunk and f*cks ugly looking 18yr olds. U guys should have him write an article about suing sworn in. Kys

Singer of Sworn-in here, this story made me say BLECK!!!

Oh look it's fgt Mesage from the Powerless Kingdom. Maybe you should have stayed hiding in your hole you worthless fvck. Everybody hates you. Not to mention, every band you "managed" wishes you'd off yourself. Get a real job.

He should write an article about being a piece of shit drunk or how he burned every bridge he had over the course of a year.

Venues have absolutely zero business taking a cut of merch sales. It's absolutely ridiculous, and I have no idea why bands put up with that shit.

9/10 any venue that does this practice is cause the bands have an extremely high guarantee and rider, it essentially covers those excessive extra costs. At the end of the day most large scale events don't always gross the numbers from the gate to cover everything a lot comes from the bar sales and such. The industry is screwing everyone honestly

Jeff Menig, you are a f*cking joke and a drunk gayg.o.t loser. Got into it with him about merch rate and he said we'll drop your merch rate if you drop your catering budget? All of this is happening while the bar in the venue was taking in so much money. I should have pushed you down the stairs of The Loft when I had the chance you f*cking waste of life. Pick up a bottle and get hammered again. Hopefully someone beats your f*cking ass.

This is very typical behavior from managers and booking agents. Let's expend the artist and stretch them as far as we can so we can make more money off of them. You sit in the comfort of your home while these bands are on the road living like pieces of shit while collecting your 10-15%. Of course your solution to this issue is burn out the artists more.

and MY reviews got deleted? lol

A good merch person would restock and pay say 2% of that rate and have the documentation and count to show for it. I took great pride in saying sorry, we only sold $100 worth of merch headlining the House of Blues and then watch them count out. I never understood why some paid in full. Maybe if the bar was shared then we'd have a deal, but nah.

I'm literally at the venue that photograph was taken like 90% of the time and I know for a fact they don't take a merch cut. Try again.

Venue wants a merch cut? Sell your your shit out of your tour van parked right by the front door. Streets are public parking and the venue can't do shit about it. God Forbid clued me into this years ago.

"mastermind behind The Power Kingdom - which launched the musical careers of Sworn In, Yuth Forever, Darke Complex" this is all you need in order to deem this opinion piece a piece of complete trash. Webby - If you are going to get an "industry insider", get one that matters. I love the idea, but c'mon man.

Attn: all you taco assed promoters bitching about booking agents. If you don't like how the agent works, then don't book the f*cking show! As long as you dipshits still book the shows, the "broken music industry" will never get fixed and you have nothing to bitch about. You are just as part of the problem as they are. If you don't like it, stop get another line of work. Its not like you idiots booking Lambgoat bands are Scrooge McDucking into coffers of gold coins over here. GTFOH.