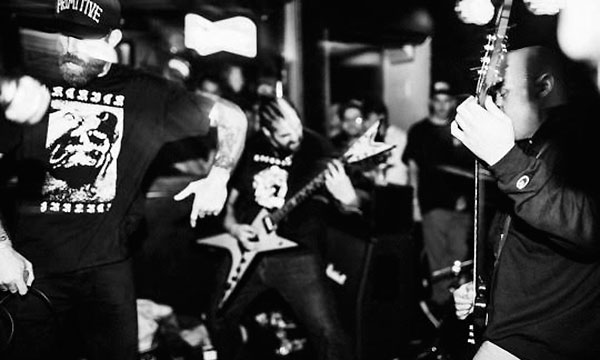 New York hardcore band King Nine will enter the studio this summer to record their sophomore album and follow-up to 2013 debut full-length, Scared To Death. If you're a fan eagerly awaiting new music, don't worry though, because the group will soon release a 7" single via Closed Casket Activities. Even better, we're streaming its title track right now.

If you're not familiar with King Nine, the Long Island quintet launched in 2011 and reside somewhere between Merauder and Cold As Life in the spectrum of hardcore music. But really, screw the comparisons. Just check out the song "The Art of War" and decide for yourself. Meanwhile, keep up with King Nine on Facebook and have a look at their upcoming show schedule.

this shit makes me want to fight everyone. women. children. readers of this comment. mike Tyson?. Katt Williams. i'll knock everybody the f*ck out to this new King Nine shit. i'll kill the whole ISIS organization to this shit. i'll smack fire out of Donald Trump and Hillary Clinton to this shit. i'll f*ck my bitch to this shit. i'll abuse hard drugs to this shit and catch myself right before the conclusive rock bottom of a hard downward spiral. i will shank someone in the pit to this 05 style

This is good but your comparisons suck and don't make sense. If anything it sounds similar to the other hyped bands out right now.

i'll legitimately fist fight my bitch to this shit. i will smash all the fine china plates and also punch holes in every room of my house to this shit. write a A+ ten page paper on violence and destruction. all to this shit

i'll forreal clothesline somebody to this shit. i f*ck with King Nine man

This song calls for straight rear with my girl..no lube ..then shove it down her throat till she pukes...then after punching her mom and entire family in the face bust a but on her dads lips...followed by running down the street ass naked straight to a burger joint..where all the trump protesters would be forced to hand out burgers for free while I donkey punched them to this song on repeat

Rebus here, I like will mosh and roll 98' style. Sounds kinda like beastie boys meet Bruce Springfield to me. But that's just me. Stoked to see them this weekend. Let's hang ok cool

I would beat my eggs to this psycho shit. These guys are crazy.

this si sick as f*ck!

this shit makes me want to hop in my GT 500 and speed through my suburban neighborhood up to my local farmers market. then, i wanna hop out of the car and spin kick the first motherf*cker i see holding some locally grown fresh produce. I'll pick that shit up, smash it on the ground, compensate them with money I earned from working in my stable IT job and apologize profusely

I ATE THE DONUT

this shit is so whack. new DROWNING kills this

i heard they were scared to play chicago because CYC hahah what a bunch of pussies. this song is lame. stay on your island

i don't get the hype of this band? only big because they have cool friends. give a younger band a shot. new Raw Dawg is the heaviest shit this year. just watch

Look at how many fake ass, mommy bought my traditional tattoo, hipster gays are in these comments. Watch out kids, this is what you get your shit rocked in to.

trying to hard to be Everybody Gets Hurt, but Dan's cookie monster voice just aint working.

why the f*ck is gay ass drowning promoting their new album / sosf support crew through lambgoat comments bashing other bands???? f@ggits. you can catch these hand any day you gay ass bitch -Wally RO/FSU (BEHIND BARZ sageUH) THEY CAINT STOP MEEEEE AHHHH!!!!! the protein in this mutha f*cka got me goin, rushed the guard and took that sagea iphone. #yüthcrü gang on top FSU SXE f*ckin shit up COME AT ME DROWNING

i heard they were scared to play chicago because CYC hahah what a bunch of pussies. this song is lame. stay on your island Not true. They played the Metro on the last Terror tour

Best band in hardcore for some years...if you dont agree you dont know talent. Try and seee me in the k9 pit. Aint happenin... -Ryan NLFTW

this band is awful, this song is even worse