Detroit's Walls of Jericho return with a new album and new music video. 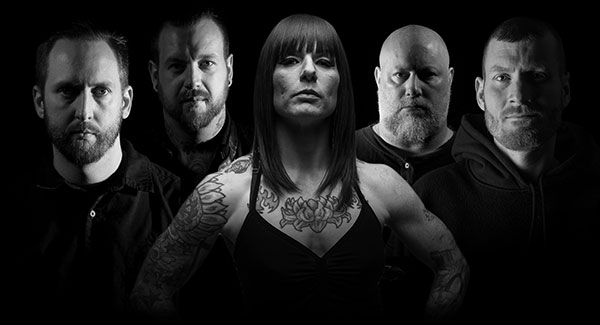 One of the bands that appeared amidst the wave of early 2000s metalcore, a swell anchored by labels like Trustkill, Eulogy, and Ferret, Michigan act Walls of Jericho were originally able to gain traction on the back of their female vocalist, Candace Kucsulain, a woman with more powerful vocals than many of her male counterparts. But because they also wrote brutally memorable songs, WOJ would stay near the top of the metalcore heap for much of the decade, culminating with two 2008 records, including a rock-oriented EP produced by none other than Slipknot frontman Corey Taylor. Following a handful of 2009 shows, the band's members chose to focus on their respective personal lives and WOJ all but disappeared for the next five years, surfacing sporadically to play shows in Europe.

In 2014, news broke that Walls Of Jericho -- still with the same lineup of Kucsulain, Mike Hasty (guitar), Chris Rawson (guitar), Aaron Ruby (bass), and Dustin Schoenhofer (drums) -- was on the verge of finally putting together a new record. Titled No One Can Save You From Yourself, the album has since been completed and is slated for a March 25 release through Napalm Records. According to WOJ, "This record was a long time coming and it seemed it would never come to light, but it did, so be ready!" Consider yourself warned.

Today we're pleased to exclusively premiere the band's music video for new song "Fight The Good Fight." Check it out below, pre-order the new album here, and keep up with Walls of Jericho on Facebook.

Tell them universal stomp wants their guitarist/bassist back

Because they have a female lead singer with red hair??

This is the face of Meth.

glad they're doing metal and not hard rock

3:15 I'm punching every hardcore wanna be with a Turnstile shirt on

Congrats! Epic launch song for the new album. Hope to see y'all soon.

that woman has a sick voice. and respect to the whole band for still going strong

always loved their sound. candace's voice is so good.

If you think this even competes with All Hail The Dead, go home and break edge.

anonymous posted 14 days ago 3:15 I'm punching every hardcore wanna be with a Turnstile shirt on HAHAHAH YES.