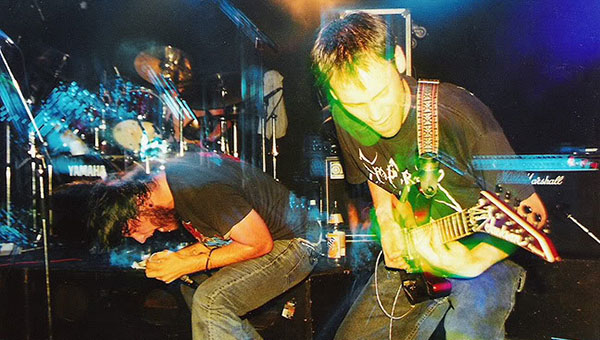 Remember Creation Is Crucifixion? They haven't done much in recent years, but at the turn of the century, the Pittsburgh, PA tech-metal "hacktivists" were making highly regarded music and testing the boundaries of technology and politics. On Friday, March 11, Creation Is Crucifixion and Robotic Empire will release a double-LP composed of the band's last recordings in addition to a compelling live set.

Dubbed Antenna Builder + Rerecorded Splits / Live In Geneva, the release includes "Antenna Builder," a nine-minute excursion into tehnical metal and noise recorded by the band's last active lineup. Separately mastered by James Plotkin for both vinyl and digital formats, the collection comes housed in a stark black and white gatefold jacket with gold ink overlaid. A digital download of the full release is included. Today we're thrilled to exlusively stream the entire record for your enjoyment. Listen to it below, and then do the smart thing and order it online (physical or digital).

By the way, if you were wondering what Creation is Crucifixion is up to, guitarist Adam Macgregor had this to say about the band:


"It's now a radically different world than when Creation is Crucifixion launched in 1997, and individually we're much different people than we were during the band's run. But one thing hasn't changed, and that's our love of writing and playing music that challenges both ourselves and the listener. The new material we are working on aims to do both. With members divided geographically by wide swaths now, we've been exploring some different approaches to composition, and rethinking what a 'band' really can be. Whatever we come up with, the goal is to respect our past work without simply rehashing it. And if it meets that double bottom line, then we'll be excited to share. Expect at least one live appearance in 2016 (TBA) in support of 'Antenna Builder' and possibly more to come."

No Scott Mellinger, no care.

Holy shit. It's hard to believe that this was a cool subgenre..

Wife is not amused, bitch

wooohoo! bringing it back

Anyone else see them with maharaj at hellfest 98 when they played in a back yard with car head lights? I love this band

way to denounce religion and the such then go join a Christian hardcore band Scott...here come the women's jean wearing, mascara toting zao fanboys,scott starred in a lemon party video with the gays from the Julianna Theory... spoiler alert *he is a bottom bitch.*

zao was never really a christian band after scott joined though

Big fan back in the late 90s... just not the same anymore. should have just left it where it was.

"should have just left it where it was" they kind of did. this is essentially of a reissue from that era.

why are the using the coalesce - ox album cover?